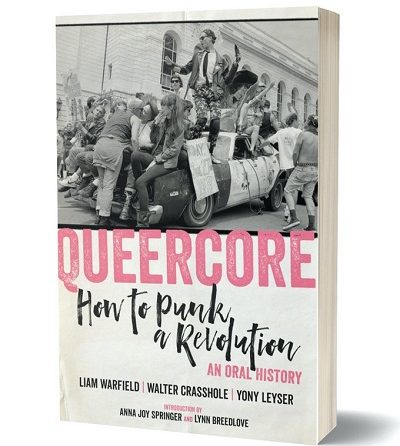 Queercore – How to Punk a Revolution: An Oral History

Queercore: How to Punk a Revolution: An Oral History is the very first comprehensive overview of a movement that defied both the music underground and the LGBT mainstream community.

In addition, there’s a treasure trove of never-before-seen photographs and reprinted zines from the time, as Queercore traces the history of a scene that was originally “fabricated” in the bedrooms and coffee shops of Toronto and San Francisco by a few young, queer punks, up until its emergence as a relevant and real revolution that it is today.

Queercore is a down-to-details firsthand account of the movement explored by the people that lived it—from punk’s early queer elements, to the moment that Toronto kids decided they needed to create a scene that didn’t exist. From Pansy Division’s infiltration of the mainstream, and the emergence of the riot grrrl movement—as well as the clothes, zines, art, film, and music that made this movement an exciting middle finger to complacent gay and straight society.

Queercore will stand as both a testament to radically gay politics and culture, and an important reference for those who wish to better understand this explosive movement.

There’s also a Queercore: How To Punk A Revolution documentary film, which was written and directed by Yony Leyser, released in 2017.

Liam Warfield is a writer, editor, and educator living in Chicago.

Walter Crasshole is a journalist in Berlin and English-language editor for the city’s forty-year-running queer magazine Siegessäule. He is also a regular contributor and columnist for Exberliner, Berlin’s English-language magazine, covering queer and cultural topics. He occasionally translates books from German to English, having just finished his third book translation for punk performance artist Wolfgang Müller.

Yony Leyser grew up in Chicago and relocated to Berlin in 2010. He is the writer and director of three award-winning feature films: William S. Burroughs: A Man Within; Desire Will Set You Free; and Queercore: How to Punk a Revolution. He has received critical acclaim in publications including the New York Times, the Guardian, Sight and Sound, and the Los Angeles Times.

Anna Joy Springer is the author of The Vicious Red Relic, Love (Jaded Ibis, 2011), an illustrated fabulist memoir with soundscape (Your Metaforest Guidebook), and The Birdwisher, A Murder Mystery for Very Old Young Adults (Birds of Lace, 2009). Her work appears in zines, journals, anthologies, and recordings. An Associate Professor of Literature at UC San Diego, she teaches experimental writing, feminist literature and graphic texts. She’s performed in punk and queercore bands Blatz, The Gr’ups, and Cypher in the Snow and toured the U.S. with the writers of Sister Spit. She lives in Los Angeles.

Lynn Breedlove is a writer, performer, musician, entrepreneur and community activist born and raised in the SF Bay Area. He’s toured comedy solo shows and with bands Tribe8 and The Homobiles. He is the founder and CEO of Homobiles the ride service. Author of Godspeed and Lynnee Breedlove’s One Freak Show.