Nothing strikes fear into the heart like a routine dental checkup, except perhaps a routine dental checkup for your toddler. The Menace had been chewing on his paws for two weeks so one day I decided to rip the band-aid off and just do it. My own dentist was closed for renovations and I had known of the existence of Danforth Children’s Dentistry  at 175a Danfourth Ave. since before Ben had visible teeth. He has a chip in the front left tooth that we were watching for signs of cavity but that was it until now. 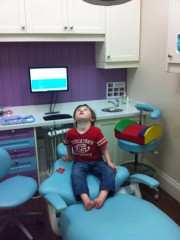 When we went into the super clean, toy adorned space Ben was immediately distracted so I could fill out the paper work. However when we went in to see the hygienist, Merissa Burnett, that was the real test. The lively décor for some reason put me at east and the powder blue childens denistit chair was a wonder for the Menace, especially when he learned that he could lay back and watch cartoons on the ceiling!

He must have felt likewise secure because he just opened up and let her count all his teeth, twenty to be precise, and even scrape a little food out of them. It was then, going over some dos and don’ts for children’s dental hygiene that I was shocked. I knew that the nighttime soother had to go, but it was a little tiring to hear about the space between the top and bottom teeth it had created. She suggested cutting all sucky cups as well as soothers and instead using a straw which would not create the same gap. This was only the beginning.

In talking about his diet of impressive amounts of fruit and veggies she was all smiles until she got to the Goldfish, apparently they are evil, well at least that is what they now seemed like to me. I looked at her in stunned belief as she explained how the content of them is actually super sticky and when the dentist is filling cavities she actually finds pieces of the little insipid cracker still in kids teeth. I was disillusioned! Yogurt drinks whatever, she said they are easily cleanable but not those little flippers. Goodbye Fin, we will miss you!

Moving on to vitamins I told her he had a gummy Flintstone every day. I knew that that was probably not ideal but she actually cringed!

“Okay I said I will switch to the chewable ones.” She shook her head.

“Those chalky pills are actually just as bad for kids teeth.”

“I know” she sighed “but the best thing is just to give him drops.” Humm sound like no fun but what can you do. Along with only a half cup of juice a day and no more nummies I know I was going to have to make this worth his while. A truck, I thought.

Especially after I noticed the tiny sliver in his cheek and he let me take it out with a bazar dental tweezers while Burnett held his hand.

What took the proverbial cake when Dr. Aisha Romain came in to see us and he literally curled right into her arm and went through the entire process again. It was then Ben and I learned of the terrifying nature of Sugarbugs!!! As he brushed away on a very teethe dragon we learn how once they her in there the like to stay and as we extrapolated they invite their friends to have a Sugarbug sleepover and you just cant kick them out without a good solid brush. Ben looked at us guffawing away like we were crazy but he was entertained and if I left him there I am confident he may have had a nap on the Dentist.

It is safe to say that this experience was one I would readily repeat and the fact that they did not even bat an eye at the mention of our queer family makes this proud mommy want to give them our business even more. The initial price was a bit hefty but after this reception and result I do not regret it one bit. 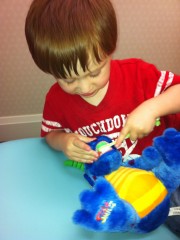 Howdy parents of all shapes and forms! Do you have any kid’s dental stories to share? Drop me a line at wilk.kelly@gmail.com