Naughty or nice. That is the concept that The Ginger Menace and I am working on this holiday season. If he is old enough to write Santa Claus a letter with a wish list then he is old enough to understand “good” versus “bad” behaviour. However it is mommy who has to sometimes remember how my good and bad can escalate his. As most parents will tell you there seems to be a universal time of day where you can pretty much bet there will be a power struggle. It is actually that uncomfortable slice of time between snack and dinner, better known as 3 PM from anywhere to 5 PM, where all bets are off. So if I take my son out to run some errands and do a grocery shop 3 o’clock who’s fault is it really? As I am still recovering from the second year anniversary of my wife’s death I have been having some very low energy, blue mood days. Couple that with my sons sometimes seemingly inexhaustible amount of energy and you can just see the collision course.

As I rifled through my backpack for a quarter for the grocery cart I knew Christmas had come to Loblaw’s by the sudden appearance of festive outdoor decorations and greenery. That in the tins of cookies and firelogs nestled snugly in the vestibule. He wanted to walk. Rule was simple, any nonsense its straight into the grocery cart. He did pretty well, even picked out a variety of potatoes since he is becoming the potato masher in this house, but by the time we got into the meat aisle he took off.

Laughing like a madman he disappeared down the spice aisle and he was so fast I had to abandon the cart and everything in it and ran after him. He’d already worked his way up and down two more aisles before I caught him and put him laughing, screaming and kicking into the child’s seat. Panting I explained to him exactly this why this was inappropriate behavior and tried to find the Worcester sauce…couldn’t. As he continued to kick me while telling me to go away I decided, screw it we’re done.

When we lined up in the express lane I figured we were in the homerun. That was when he picked up one of the carefully chosen potatoes and launched it. Next was my hat and pretty much anything else he could grab. My mother has always told me a fable about parents who abandon their grocery carts in the middle of shopping because they have completely lost control of their child, well now I am living proof. I tried to notify the customer service person as we passed the desk. She was just one of the bevy of sympathetic looks that I was getting as she said “go, go” and waved me out, a The Menace kicking and screaming at the top of his lungs. 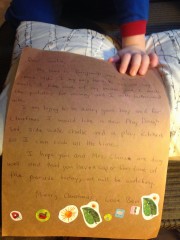 I guess it’s no point pushing around blame on a day like that. He was overtired, under exercised and cranky. I had zero patience, nada energy and a pretty much a flatlined sense of humour. At the end of the day I felt like a terrible parent being so stern and angry and we both cried at bedtime. After the emotional Olympics his eyes closed by 7 o’clock and I was left to regroup. Now as we sit waiting for the Santa Claus parade having just penned the letter I think, there’re so many ways that could give him a “naughty” example but as I have learned being a parent is an exercise in repeating yourself until something sinks in and he is only three so I have quite a ways to go.

I am too tired for that today so yes I will focus on watching snowflakes outside the window, on hot chocolate with marshmallows, popcorn and to the parade. And digging the puffy blue one piece snowsuit out of the closet so I can take him to the park and run him properly. After days like yesterday we have an automatic out where we can forget the naughty and just start over. Like a fresh blanket of newly fallen snow everybody deserves a do over and the holidays after all are supposed to be about peace! Ho ho ho. 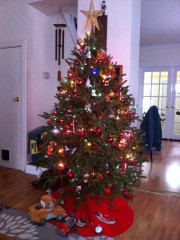