I have learned that I can give no credence to the old wives tale – mothers (or parents of any variety) do not in fact have eyes in the back of their head. Even though it can seem like that when they catch you doing something you’re not supposed to. The contradictory phrase that tends to be uttered far more often is “I just took my eyes off of them for a second.” Let’s face it kids are faster than parents, and in the case of my son, wicked fast.

Whether it’s tossing your underwear drawer or emptying out the pantry. you just can’t keep your eyes on them every moment of the day. so I try to forgive myself and remind myself that I’m human. My house is allowed to be messy because I have a child, and there are timeouts which are a good solid four minutes of cleaning time.

This morning while I was on the phone with the contractor, little man took it upon himself to make me soup. Pumpkin soup in particular. It wasn’t a random act of creation, but mimicking a book about a squirrel, a cat and a duck that make pumpkin soup every day. When I went into the kitchen he had taken the pasta pot from the night before, and dumped a generous amount of balsamic vinegar into it and shook in a couple of teaspoons of dill.

Looking at the pot I realized I had no choice, so I figured why not let’s see what he can come up with. I did not have a can of pumpkin purée like I thought I might, so instead I substituted for a can of lentils telling him they were like pumpkin bits, and watered it down the vinegar a bit. He then chose a can of diced tomatoes. I convinced him to add some onions and a Worcestershire sauce (as I knew I would be eating it later).

He then shook basil, parsley, thyme, and some cloves into the mix. I then convinced him we had to let it bubble for a while in order to see what it was going to taste like at the end. It ended up looking not too bad and tasting better than it looked. This little culinary adventure reminded me that sometimes messes are opportunities for creativity. I do want to do everything I can in order to foster that spark of enthusiasm where he shows an interest. In this case it reminded me that messes are an opportunity to help me go with the flow…and apparently eat soup. 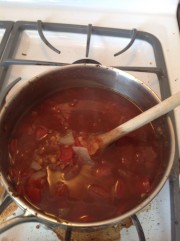