So, The Ginger Menace has gone a little nuts about some very cool thunder lizards, it’s Dino mania in this house! Dinosaurs on trains, dinosaurs on fire trucks, dinosaurs on books, puzzles and television. When it’s time for lullabies he even makes me sing a new version of an old favourite, “every Dino that ever there was will gather here together because today’s the day the dinosaurs have their picnic.” Yes dinosaurs are everywhere! Even in our garden!! At this very moment we have a tiny clutch of dinosaur eggs, carefully placed in our newly converted rock garden that was formally a very overgrown, boring front lawn.

His fixation with dinosaur eggs has been the only thing to rival his obsession with dinosaurs themselves. They tell me that interest in dinosaurs is pretty much one of the developmental stages somewhere between potty training and learning to tie your own laces, which I am now thinking about as junior kindergarten creeps ever nearer in September. However that was not so much what caught my attention. It was this idea of the nest egg. Something so big and so important, it is hard to imagine it can be contained in such a small, fragile object. It was actually my idea to put some “dinosaur eggs” into the garden when I found this and some other small stones in the basement. We bought this rock engraved with “grown to perfection” as a cutesy keepsake before our son was born. Now it is a beautiful memory of dreams that are now a symbol of what they have become.

I have been experiencing new and big ideas as well. For example reading my own work at public events that included an erotica reading, tackling my first acting role in roughly 15 years, and traveling with a new partner to New York City. Right now I feel like my life is burgeoning with possibility and I have been thinking about following my passion and how it is one of the best ways I can teach my son to dream. It is no question that when I start to create I get part of myself back. Or rather I become whole again. Watching my son it is clear that while we might be interested in different things, he is quickly showing himself to be just as creative and imaginative, sensitive and curious as I was.

In New York we found this amazing children’s book “What Do You Do with An Idea?” by Kobi Yamada, illustrated by Mae Besom. At first I was nervous on this Dino-heavy day because it didn’t specifically mention them. However as I opened the book I once again was grateful for the beautiful synchronicity of the universe. There were no dinosaurs, but there was one very important egg. 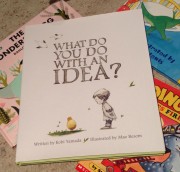 Right away The Menace identified this symbol of an idea as a dinosaur egg. It had a crown and walked on two legs and he was captivated by it. The story describes how a child comes to understand what an idea or, perhaps a dream is. Sometimes it doesn’t seem important and sometimes he wished it wasn’t there, but as the story continues he begins to want it, to play with it, to feed it and eventually love it. Like Dorothy Gale stepping out of a black-and-white world into full colour, this beautifully small idea grows into something wonderful. I love the last page where the answer is determined, that with the right idea someone can “change the world”, but I also like how this beautiful idea changes him as well.

In a world where letting go of your dreams happens sometime, this is a beautiful and hopeful testament to how we can rediscover them. Teaching by modeling has been a wonderful way to learn on my journey of parenthood, and along the way I am very glad to have this book to remind him that even if no one particularly likes, understands or appreciates your dreams, they are important because they are yours. Remember that no one can give them unconditional commitment and love except you.