Oh the sticky days of summer are here. Lining up our dinosaurs on the rug in an air conditioned house is definitely on the list, but The Ginger Menace can only remain cooped up for so long. So it is with pride that I announce that my little superhero has conquered the spiderweb! On a super sticky day we headed to a local playground and amazing splash pad in Withrow Park. We worked our way through the collection of climbers and toys on the side of the park designed for smaller kids, but it couldn’t hold his interest forever. There it was in their newly renovated play area, the intricate mammoth structure made of orange rope. How fitting! Immediately he wanted to climb “the spider web.” 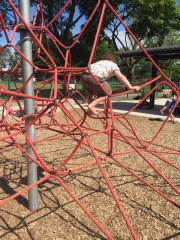 “Sure buddy, just take off your Ka-chow (Lightening McQueen) crocs”, I cringed as I looked at the apex of this pyramid-esque climbing contraption. Gravity looked pretty absolute up there, but I certainly wasn’t going to stop him from trying. He does after all start school in the Fall and will be eating his lunch, doing up his shoes, and playing with friends in my absence five days a week, so I figured I’m better to start practicing letting go now.

I could tell he was nervous as he had never scaled such a complicated structure before. Unsure of where to put his hands and feet and how far he could safely stretch I stood beside him, offering up a string of encouragement and suggestions, such as “How about that rope, move your feet then pull yourself up with your hands, you can do it mommy is right here”.

His legs and arms were shaking as he went from rope to rope, but he was determined to climb as high as he could. He made it about half way up the structure and spent some time climbing around the middle before he wanted to come down. That was a number of weeks ago, and yesterday we found ourselves at the same park. After belly flopping in the water for an hour and drying off he asked, “We climb the spider web?” 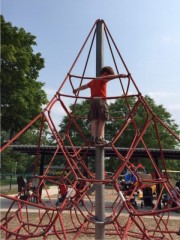 I was quieter this time and only offered a suggestion when he got stuck, but inside I was blooming with satisfaction. I stood back a little and realized that in that moment he was a different child than he was the last time on this climber. Sometimes when you spend nearly every day with your child it is not so easy to see the slow, subtle changes in them. However here was change staring me in the face. He was suddenly more confident, more sure of his ability to do what he wanted to do. There were a few moments of hesitation, but he crowed like a rooster as he got to the high ropes and I, the proud mommy stepped back to take a picture.

I am reminded of little victories and their importance in life. We can’t do everything all at once, but if we take it in parts then the outcome will grow into a kind of victory that only bravery, tenacity, personal experience and time can create.