There is an urban legend in my family, and that legend is a sandwich. What? You say that seems pretty dramatic for the subject matter. Well, follow me and I will let you decide just how epic a little story about a sandwich can become!

On the way home from an outing picking out his first school lunch box, I decided it was time that The Ginger Menace learned a little family history, and learned how to make his lunch. Of course the items he picked were dino-rific with a couple of easy open animal-tastic Tupperware’s, that opened up to reveal more Tupperware’s, like a little Russian dolls!

“So” I looked down at him as we waited at the bus station, “it is time I told you a story about your Grandpa and The Peanut Butter Eel Sandwich!”

“Dats silly”, he said. I got an appreciative gasp and a smile.

“But its true. It happened a long long time ago when your Grandpa Wilk was a boy who went to school. One day your Great Grandmother was packing his lunch and there was nothing in the fridge.” He nodded with empathy, as we had just gone to Tim Horton’s for dinner because of the same predicament.

“All she had in the house was peanut butter….and eeeeeeeeeel! So she put them together!”“Ewwwwwww” and rochus laughter.

“So when your poor Grandpa opened his lunch box at lunch time there it was, a squishy, squashy, nutty sandwich, and your grandpa just said bleck! He threw it back into his locker in the paper bag, and do you know what happened?” 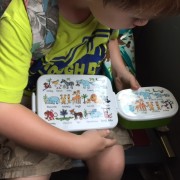 “Well your Grandpa never wanted to see that sandwich again, so, he forgot about it! Everyday stuff got piled on top of that squishy, squashy, nutty sandwich and soon it started to smell. By the end of the year Grandpa was really wondering what was up with his locker. It was time to clean it out. So he dug out books, pencil cases, and a frog… and way down at the very bottom was…..the Eel and Peanut Butter sandwich!!!!”

“Yes! It had been down there so long it had grown and your Grandpa could not get them out of the locker so, he called the firefighters. They came in a truck with a sirens blaring we wa we wa we wa. They pulled up to the school, rolled out their long hoses down the hallway, and they blasted water into Grandpa’s locker. And you know what? The Peanut Butter and Eel sandwiches didn’t budge!

So they didn’t know what to do. They tried everything and that lunch did not move. Until, until, until your Grandpa called…..The Coast Guard!!! Yes they landed in the parking lot in the helicopter and came flapping down the hallway in goggles and wetsuits, and they bravery jumped head first into that locker and swam after the sandwich eels. They thrashed and they splashed, and try as the might, they still could not hold on to those slippery eels.

They thought it was hopeless, until Grandpa said, “how do you catch a peanut butter sandwich? Why, with a jelly fish of course!” They agreed and sent for the biggest jelly fish they could find. When it arrived they poured that bucket of jelly fish right into the locker and all the Peanut Butter and Eel sandwiches rushed right at the jelly fish, so happy to have found a new friend. The firefighters and the police officers and the coast guard in their wet suits lost no time. They scooped them all up and took them to the lake. And to this day the brothers and sisters of the Peanut Butter and Eel sandwiches swim in little schools with their jelly fish friends.

The moral of this story? Always bring your lunch bag home so you and your parents can clean it out, or this could happen to you!