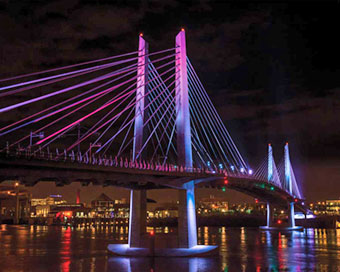 Tilikum Crossing: Bridge of the People is the first new span to join Portland’s roster of bridges since 1973, and it’s the longest bridge in the country that does not carry private vehicles!

It officially opened to pedestrians, cyclists and mass transit on Sept. 12, and on Sept 10 at 9 p.m., TriMet flipped the switch on Portland’s largest public art display – a dynamic illumination of the new Tilikum Crossing. Officially titled “Tilikum Light: An Illuminating Conversation between a River and a Bridge,” the light display is the only aesthetic art feature in the country to be controlled by river data.

One-hundred seventy-eight LED lights shining along the bridge’s 1,700-foot (518 m) span will shift in movement and color based on river conditions collected in real-time by the United States Geological Survey. The base color will vary with water temperature and season, while a second color’s vertical movement along the bridge’s four towers and 40 cables will respond to the river’s height. Additionally, the pace of color movement will ebb and flow with the river’s speed. Powered by renewable energy, the permanent lighting display will activate each evening at dusk. The lighting display is the work of artists Doug Hollis and the late Anna Valentina Murch and is part of TriMet’s public art program for the Portland-Milwaukie Light Rail Transit Project.

A vital element of the Portland-Milwaukie Light Rail Transit Project is a new bridge across the Willamette River, the first span built over the river since the addition of the Fremont Bridge in 1973. Named Tilikum Crossing, Bridge of the People, this bridge will be distinctive in the United States, designed to carry light rail trains, buses, cyclists, pedestrians and streetcars, but not private vehicles. However, emergency responders will be able to drive on it if necessary.

From a distance, Tilikum Crossing, Bridge of the People, may look complete, but construction continues. Through 2014, crews will install rail for the trackway, the overhead electrical system that delivers power to the light rail vehicles, handrails for the multi-use paths, and barriers between the trackway, bridge cables and the multi-use paths. In 2015, expect to see light rail vehicles, streetcars and potentially buses on the bridge before the opening date while testing and the training of all transit operators occurs.

The bridge has a cable-stayed design, with two piers in the water. A cable-stayed bridge is a bridge that consists of one or more towers through which cables are strung to support the bridge deck. Cable-stayed bridge types are efficient at spanning long distances while allowing a reduction of the number of piers in the water. Such bridges also can be designed with thinner decks than other bridge types, making possible a more transparent structure and a greater vertical navigation clearance.

The bridge name is Chinook Wawa, an international language used by first Oregonians, and later spoken by explorers, fur traders, settlers and the first few generations of Portlanders. Chinook Wawa is still spoken today. Tilikum means people, tribe and relatives, and has come to mean friendly people and friends.