When ‘Acceptance’ Isn’t Enough: Alberta MP Joan Crockatt has it all wrong.

Unless you have been living under a rock, or you are one of those who ‘just don’t care’, election season is upon us. For most of us in the queer community, the decision is easy – anything but Harper. And for those that will vote to continue the Harper regime, I will remind you of this beauty:

Here in Alberta, the political arena has sprung into a leftist-cesspool of confusion. Our Premier is none other than a female NDP’er, Calgary’s Mayor is a single Muslim in his 40’s, and there are more openly gay MP’s than can be counted on one hand. To many old school conservatives that consider Harper to be as progressive as Obama, Alberta is turning into Switzerland. With this leftist progression comes a right-wing backlash. This backlash can take many forms, and sadly it has turned on to one of our most valued sectors of the queer community.

Joan Crockatt is a Conservative Member of Parliament and represents Calgary Centre. Her focus is on gender and politics and claims to be an advocate in ensuring female representation. She made headlines last year by being one of the sole Conservative marchers in the Calgary Pride Parade. Her reception in the parade was met with some dissonance, and very little cheering, but was taken with a grain of salt. 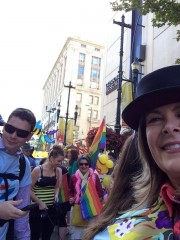 This year, Ms. Crockatt decided to take another shot at marching – no harm, no foul. Luckily for us, someone did their research on the Conservative Joan Crockatt, and her confident participation in our Pride Parade was no longer welcome.

You see, back when Bill C-279 (a piece of legislation seeking to elevate transgender rights by adding gender identity provisions to the Criminal Code and the Canadian Human Rights Act) sought votes from members of parliament, Crockatt voted against it.

When this savvy researcher unearthed this non-vote for trans* rights, they went straight to social media. The mainstream media caught wind of the issue, and both Pride Calgary and Crockatt were put in the hot seat.

When questioned for her non-vote, Crockatt spoke with confidence that a no-vote was actually a vote for trans* rights. Confused yet? So was the Calgary community. Apparently, after consultation with EGALE, Crockatt decided to vote ‘no’ to the Bill because it did not do enough to protect the trans* community.  This was also the excuse she gave Pride Calgary, allowing them to say ‘yes’ to her parade entry.

When EGALE was contacted in regards to this ‘consultation’ this was their response:

“Egale would never endorse or encourage or tacitly approve of a vote against C-279, in the form passed by the House of Commons. To use consultation with us as an explanation of their vote against Bill would be a complete misrepresentation.”

Caught up in her own lies, Crockatt dropped out of the Pride Parade.

What people like Joan Crockatt haven’t counted on is the fact that we no longer accept ‘tolerance’. We want action, and this incident with Pride Calgary only proves that point.