The roasting pan was steel, a little battered, and stained with many years of by gone turkeys. Just thinking about it I can smell the hint of salt and pepper, paprika and touch of curry mom sprinkled over top of the birds. However that is actually a separate memory from the one I experienced a few weeks ago when I was making a sugary treat for The Ginger Menace’s first school Halloween festivities.

Mom used the roasting pan to make her Carmel Corn recipe, because it was the only one big enough to make the amount she wanted for our annual Holiday craft show. We would put it in a bunch of little bags and tie them shut with red ribbon. It was always one of the smells that let me know Christmas is coming. I can still see her carefully and laboriously folding a sticky, molten hot caramel sauce over a fluffy mound of white popcorn. This was the image that struck me when I was trying to decide (panicking a titch) about what to make the night before.

I didn’t have her recipe and given that she was in Africa on Safari at the time, I couldn’t exactly phone her up and ask, so I asked Mr. Google as we call him. I looked it up and came to the next likely candidate Paula Deen. I was relieved to see that it didn’t look too difficult, so I hauled out the air popper. I had not made homemade popcorn for The Menace yet and he was enthralled with the way the little golden kernels spun around in the oil at the bottom of the machine and eventually erupted in a burst of sound and smell.

I deliberated over what one would consider a “batch” of popcorn, as apparently I needed two of them for this recipe. It is equivalent to 6 to 8 quarts but my brain was not conversion ready, so I just made three loads of popcorn from the popper which were three cups of kernels. My brain was already a little bit stymied trying to decide what Karo syrup was, so then I finally just asked Mr. Google again.

Once the corn was popped I set it aside and took out a pot adding a cup of butter, half a cup of corn syrup, one teaspoon of salt, and one of baking soda. All the while I was singing “Paula Deen you’re my queen that Paula Deen”, and smiling remembering all the Food Network Kara and I used to watch. The only place where I panicked a bit was when I realized I did not have much in the way of brown sugar. I was able to get about two thirds of a cup and topped it up with white, but after that I still needed one more cup. In moments like this I try to channel my wife and adopt her cool kitchen demeanour. Then I suddenly thought “molasses would work as it’s just a whole lot of melted sugar anyways!” 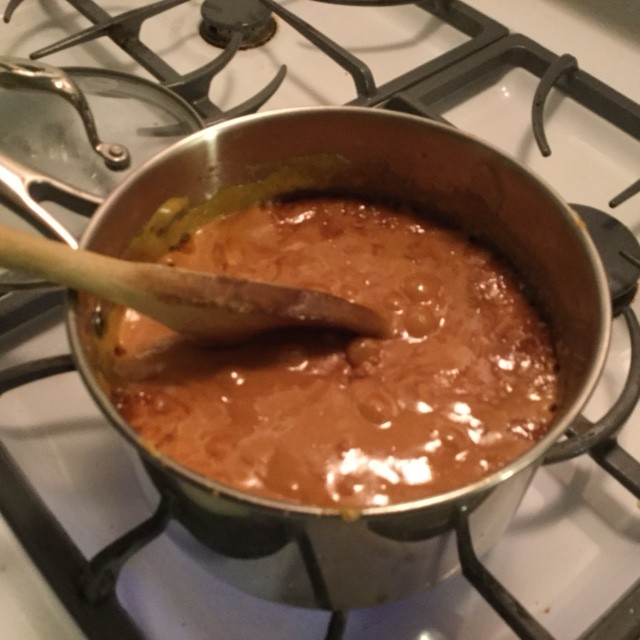 Still humming and continuously stirring the caramel concoction at a medium high heat the buttery sweet smell was downright relaxing. However, now came the tricky part. I had already ramped the oven up to 200° and tried to be very careful as I poured it over the popcorn. A friend and chef I experimented with making sugar brittle and candy, assured me that a caramel burn was a special kind of horror, as it continues to cook while it doesn’t come off your skin. I was also concerned that I wouldn’t have enough caramel sauce. However it did not dull the delicious maternal feeling I had folding it over popcorn in the roasting pan.

It made me think about memory. We really do what our families used to do because of the comfort that the nearness to memory creates. I really was re-creating a beautiful part of my childhood for my son. And while the efforts of my cooking were certainly tangible, what wasn’t was the beautiful effect that the beginning of traditions and rituals can have for a family and individuals. I was certainly tired at one in the morning once I had finished stirring the popcorn every 15 minutes for an hour, but the result was fantastic. 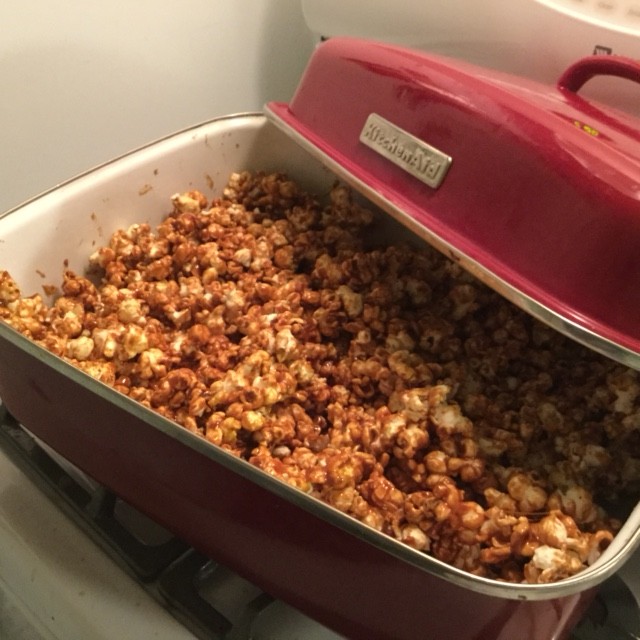 The Ginger Menace had an awesome treat to take to school, and an awesome full body fuzzy brown stegosaurus costume to wear in the Halloween parade. He was having so much fun this year I even got into the spirit and went out as the Paper Bag Princes, i.e. A Cinderella crown, an inside out leaf bag and a black (washable I hoped) marker he rubbed all over my face, arms and legs. Talk about making a memory. Things like this make me excited about the years to come. About the time I will get to spend with him while he is small, and the ways that the traditions we start now will last for the rest of my life and his too. 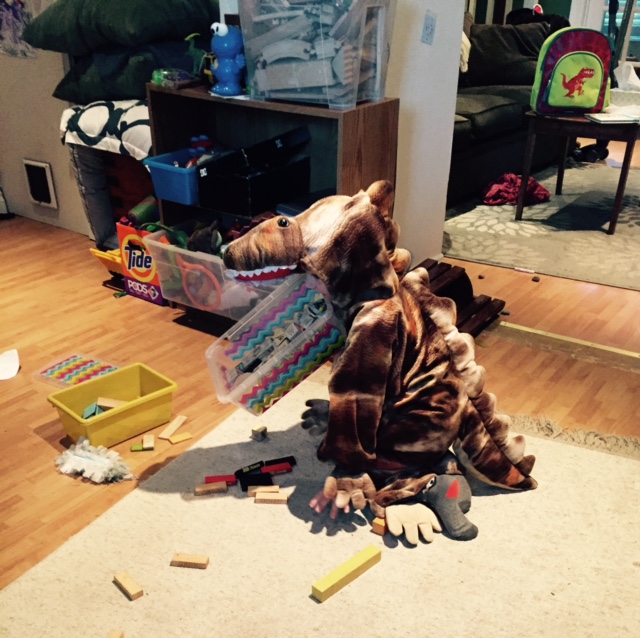 Put butter sugar and syrup over medium high heat and when it gets bubbly boil for five minutes stirring constantly. Pour over the popcorn and bake at 200° for one hour stirring every 15 minutes.

I think making it while listening to festive music makes it turned out better! We were listening to The Monster Mash and Ghostbusters all afternoon. I am so proud of my Halloween treat! 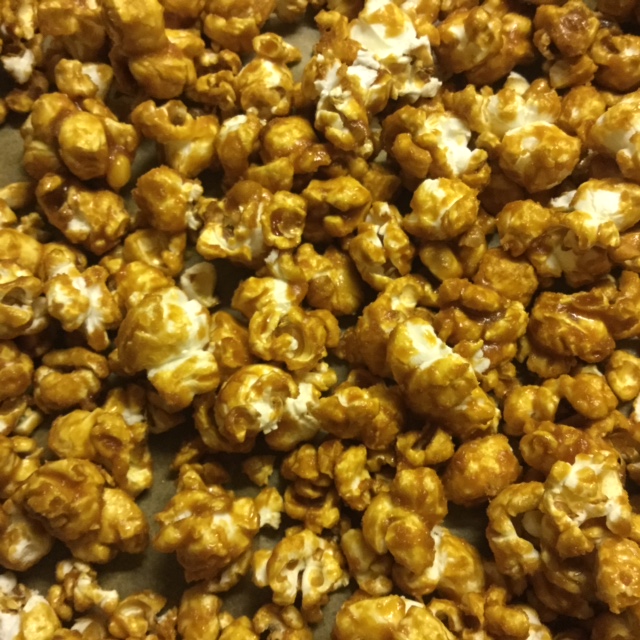