When The Ginger Menace and I rolled up to The Roseneath Theatre I was not sure what to expect, therefore I was blown away by the scene we were greeted with. The folks at Roseneath sure know how to put on a kid friendly party! 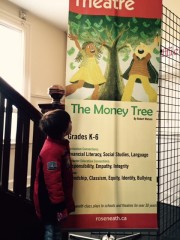 First we were met by a wide variety of items for the silent auction, and two special items for the live auction, which I will tell you in more detail about later. The Ginger Menace and I headed straight to the craft table where he got down to some serious leaf decoration aided by a wide selection of markers, sequins and over-sized be-dazzlers. He was then led to a giant painted scene of a tree just that the kids were invited to decorate for the performance. 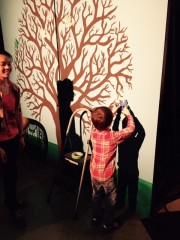 Next giant signs led us to a phenomenal spread of food, and then we tucked into the main course; The Money Tree! The afternoon performance began with an address by the lovely Artistic Director Andrew Lamb. What impressed me most was his passion for creating accessible theatre for kids, that is also accessible to artists who are  passionate about creating a diverse theatre experience for children. It made me feel very good about supporting this fundraiser, not just for my child but children all over Ontario. Lamb said, “funds raised from these events will enable us to reach farther into the province, reaching communities that don’t as often have access to this type of arts experience”, And what an experience it was!

Playwright Robert Watson was nominated for two Dora Mavor Moore Awards in 2015, and I’m not surprised, it was truly magical! The Money Tree featured a dynamic trio of actors – Joshua Stodart, Stephanie Jung and Rebecca Perry. The Menace was mesmerized as the story unfolded. and I loved seeing the birthday girl Shasta being playfully and subtly taught by Simon. It provided her time to reconsider the loss of her fabulous but expensive birthday plans, due to the loss of her father’s job,  as an opportunity to develop her imagination. Even though Shasta was hesitant at the start, stating “this feels silly” , Simon answered, “well that goes away after a minute!” So witty, so fantastic.

Actually The Menace was up on the chair on his knees,wathing with his little fingers in his mouth as they played the “lava game.” I actually jumped too when Shasta almost fell in. Her transformation from a public school kid focused on cellphones and pony rides, to a strong character with integrity that is willing and capable of standing up for her beliefs and for a friend, was fantastic to watch play out. The delightful cape swirling, magic wand waving would-be-pal, the child of a single parent, carried the whole theme of magic through the production. I was inspired to see the character of his mother come through in such a loving way.

When a stranger rolls into town with a golden acorn to make a magical money tree grow, both Shasta and Simon were challenged by its existence. Shasta by her inability to understand want versus need, and Simon by his need for peer validation. As the only two rules for the tree were take what you need and tell no one, the tree was duly deflowered. In the end a fantastic lesson and opportunity for growth. Shasta begins to understand the non-monetary value of friends and family, integrity and finding all of the important things already located within you. Simon finds a way to not let other people’s negative opinions overshadow his unique attributes.

We are left with one last seed of pure wisdom when Simon again quotes his mother on the importance of being positive and having faith, no matter the struggles that life brings. “My mom says you can’t make a better future unless you imagine it first.” What an ultimately fantastic thing to teach a child and what better time to learn it then in childhood!, when hopefully there are absolutely no limits on the scope for the imagination and that is truly invaluable.

Oh and for those who wondered about my participation in the fundraising auction, it landed me with a shopping bag full of “Super Capes”, which of course The Ginger Menace was all, over and tickets to take him to the Broadway hit show Matilda!.Expect a review on that shortly after! 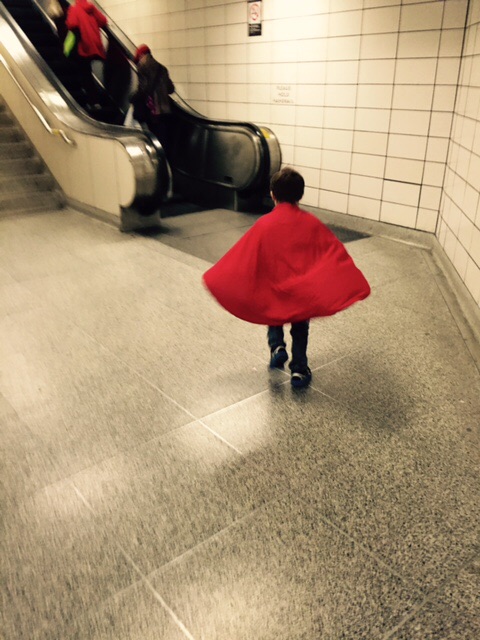 To learn more about The Roseneath theatre click here, registration is now open for the Spring Kids and Youth Drama Classes and Summer Camps!