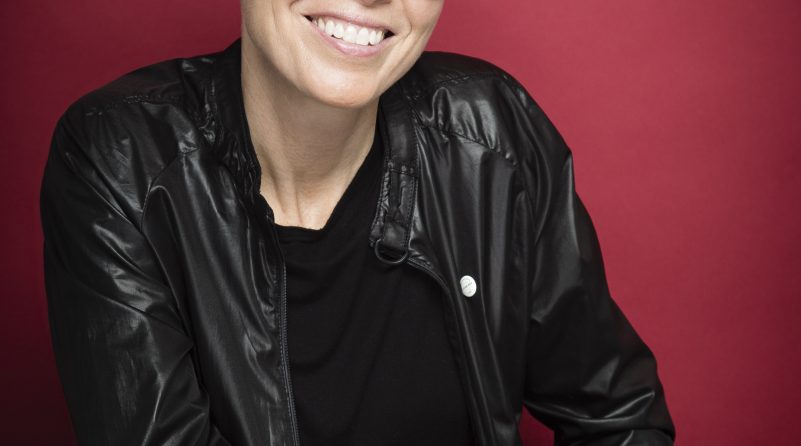 Part of this article originally appeared in the print edition of PinkPlayMags, and the full interview with Jonathan Hiltz appears below.

Elvira Kurt is one of those names that if you don’t know who she is directly, you know you’ve heard of her.  She has been a stand-up comedian for thirty years, a TV talk show host, a game show host and a radio personality among many other things in the entertainment landscape.  She has been credited with coining the term ‘fellagirly’ to describe herself and other lesbians like her as a combo of ‘butch’ and ‘femme’.

I was lucky enough to interview Elvira and got a first hand look at all of her neuroses, the things that make her so damn funny.

You have had a long and storied career, doing many things in the public eye.  Can you tell me who Elvira Kurt is today?

I’m the same person I’ve always been: a queer struggling with self-acceptance. Not that I knew that thirty years ago when I started doing stand up. Back then I was all high-functioning coping behaviours and knee-jerk survival mechanisms. I was lucky that they all presented in socially palatable ways, so that I was seen as ‘driven’ or ‘ambitious’ and ‘hard on myself’ or a ‘perfectionist’. Looking back now, it just feels… ugh, so messy. Like from a tornado.

So today, at 54, where I’m at is that along with my stellar repertoire of neuroses, I’ve added a growing self-awareness, which is one of those ‘be careful what you ask for’ things. About 15 years ago, all the coping stuff stopped working and it affected me onstage and off. Badly. I couldn’t figure out why I always seemed to choose the hard way or to choose unhappiness. Since then what I’ve uncovered and continue to unpack in therapy to this day has improved both my work and my personal life. But the price for choosing to be awake is that once you start, you stay awake. It’s not like you can go back and be unself-aware, I can’t ever un-know what I’ve learned. It can be annoying as hell but, for me, the alternative is worse.

Today, the reality is that I can’t avoid my shit and I have to face it constantly and also own it which, ugh. Externalizing your issues is so much easier but it also means always being a victim which, nope, done. For me, being a victim is just the lowest depth of misery. So. I deal, I own, I learn and I grow. And because I’m a comic, I make fun of it all along the way…. Yep, that’s exactly who I am today.

What are you currently working on?

Oh, not much… tomorrow, I head to the Halifax Comedy Festival where I’ll tape two different never-before-seen-on-TV sets of stand up, after just having had to do the same thing two weeks ago for the Winnipeg Comedy Festival. That’s a lot of material that has to be rock solid, so I’ve been getting up on stages around Toronto trying to work this shit out.

At the same time, I was asked, with less than two weeks notice, to step in as host of this year’s Writer’s Guild Awards. Couldn’t turn that down but now I have to adapt a script written for someone else so that it works for me and then perform it.

I’m also currently story editing a reality TV show that will air on CMT, a sweet 9-5 gig that’ll take me through the summer. Concurrent to that, I’m getting another draft done of a short film script that’s set for production in August as well as punching up a pilot script for a tween show that I really want to be involved in.

Last, but definitely most fun, are the three shows I have during Pride in Toronto at Buddies In Bad Times Theater, June 20, 21, 22. I’m excited about these shows because I’ve asked some of my favourite comics working today to come out and kill it, like they do. 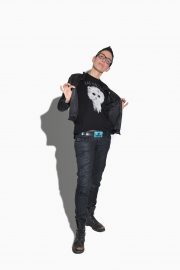 What are you most passionate about these days?

Answering questions as thoroughly as possible.

Why over the years have you chosen to stay with comedy, performing, the arts in general?

Ooh, I like this question. What I get from stand up comedy is that I can never get it right. Every show is an experiment. There’s no guarantee that what worked last night will work the same way tonight. I like that not knowing, I like the trying. A lot.

When I’m onstage, I don’t get bogged down in self-criticism, I don’t have the time or the head space. I’m totally in the moment. So on stage, doing stand up has always been the one place where I’m okay with myself, as is. Of course, once I’m off stage, hoo-boy, different story but again, working on it, thank you, therapy….

After 30 years as a performer I love stand up more than anything else I’ve ever done and I actually love it more now than when I started. I think it’s because now I do it for a different reason.

At first it was to make up for something, it was from a place of trying to fill myself up. Over time, as I’ve learned to make myself whole, doing stand up comedy has become about adding to what I have, so the way I approach my work has changed.  I still perform because I have a need, the need to do well, to get laughs, to try new ideas, to be seen and heard, but it’s need that comes from being curious and playful, not neediness that comes from desperation and scarcity… does that make sense?

Who or what are your main inspirations?

Bravery and audacity, in art or life.

How does your creative process work?

Kinda like this: throughout the day I notice things. I make a note of the ‘things’ I have the strongest reaction to. Some of those I connect to more deeply and they become ideas. Making an idea funny comes together in my mind, like a sensation, a visual sensation.

Before a show I pick and choose which ideas I want to try and keep the ones that best link together in a way that flows or makes sense to me. That way I can hold a bunch of different ideas at a time. Then I go onstage and use words and my body to act out what I see in my head. Plus whatever bonus new stuff appears in the moment.

But why read about my process when you can see for yourself how it works: