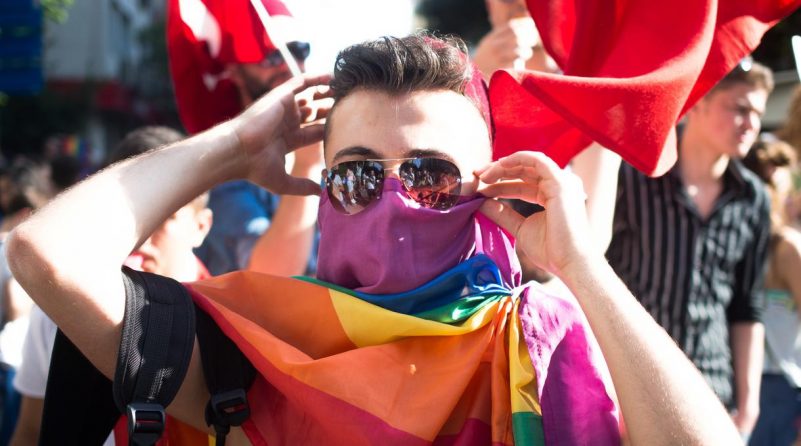 So here we are, yet again. Brush of your beads, find your rainbow knee-high socks, and maybe purchase a tutu – folks, it is Pride month! This is not an easy year to celebrate due to recent events targeting the LGBT community, however the show will go on.

As we happily drink our weight in watered-down hi-balls while cheering on our favourite airline’s ‘inclusive’ float, we may want to take a quick glance at the Dollar Store poster board and hockey stick signs that declare  such slogans as ‘Real Women Have a Vagina’,  ‘We Stand With Queers in Palestine’, or ‘Men Have Rights Too’. My guess is that most of us don’t pay too much attention to the entirety of these statements. Perhaps if we did, the mundane familiarity of airline floats would be squashed under the real reason why Pride is still valid and necessary.

In 2010 Pride Toronto ran into some trouble that still leaves its traces even now. Queers Against Israeli Apartheid (QuAIA), a Toronto-based organization that sought to eliminate what they (and many others) deemed Israeli Apartheid, was initially banned from the parade that year because of the use of the phrase ‘Israeli Apartheid’. After much pressure, Pride Toronto reversed its decision and QuAIA marched, only to be questioned year after year by City Officials, politicians, and in fear of losing city funding, Pride Toronto.

Veteran lesbian activist Miriam Ben-Shalom was recently stripped of her Grand Marshal status with Milwaukee Pride due to her stance on transgender women. She is very vocal about her transphobia, spewing out her hatred of trans women using the woman’s washroom. In her response to the revoking of her Grand Marshal status, Ben-Shalom stated in a lengthy letter to the Milwaukee Pride board, “For your information, I am indeed a PERF–penis exclusionary radical feminist who believes that women born of women have the right to safe spaces of their own, and cultural events they put on for themselves and those sisters who might like to attend. After all, men have had a long history of male only spaces in the LGBT community and not much ado was made of it.”

Last year, Vancouver Pride made a precedence by disallowing the B.C. Liberals to march in the pride parade. The Liberals declined the signing of a pledge created by Vancouver Pride that expand human rights protection to transgender and gender variant folks, and unfortunately for them, Vancouver Pride required this signing in order to march.

According to Laura Miller, who was executive director of the B.C. Liberals at the time, they did not sign the pledge because, “It’s not a human rights issue, because transgender and gender-variant people are equal and they are covered under the B.C. human rights code.”

Chrissy Taylor, Vice President of Vancouver Pride disagreed with Miller’s stance. “Folks who aren’t within the binary of male or female or identity as trans are not covered under the human rights code, and can’t explicitly file claims on behalf of discriminate (based on) gender identity. It’s not there so they aren’t covered.”

These three examples are simply that –  a very small example of the little things that we may have missed in the menagerie of beads, beats, and balloons. No matter how commercial Pride has become, underneath all of the glitz, glamour, and ‘gay-friendliness’ lies the underpinnings and political upheaval that existed in June of 1969 at the Stonewall Inn in Manhattan.

I think that perhaps this year, of all recent years, paying attention to the finer details in your local Pride Parade is imperative. Sure, having a larger blow-up jet cascading down the street with rainbow wings and a Cher soundtrack, or the most glittery float carrying our favourite news team down the parade route is fun – but it isn’t real. These folks aren’t paving the way for full equality and the right to safety in our own spaces.

Our fight may not be 1969, but it is 2016. We are fighting in our small ways while attempting to survive and thrive in this world of hours.