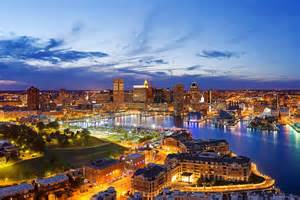 Charm City, Monument City and Crab Cake Capital of the World – these are just a few nicknames given to Baltimore, Maryland. Baltimore has also been dubbed “a city of neighborhoods,” each with different personalities and distinct offerings from world-class museums, craft breweries, historical sites and more.

For a look at some of Baltimore’s unique neighborhoods and what to do/see/eat, read on.

Baltimore’s Inner Harbor has many stories to tell, from its heyday in the 18th century as the nation’s leading shipbuilding site, to a major site for oyster canning, steel working, railroad building, immigration port and military supply center.

What to do: If you’re traveling with kids, the Inner Harbor is a must – you can learn about more than 20,000 aquatic animals at the National Aquarium, explore hands-on exhibits plus a planetarium at the Maryland Science Center and visit Port Discovery Children’s Museum, ranked among the top Children’s Museums in the U.S. by Parents Magazine in 2015.

Where to stay: Originally built in 1928, the historic Lord Baltimore Hotel is a recently renovated historic hotel in the heart of Baltimore’s business district, connected to the Inner Harbor via a skywalk, and with a newly opened rooftop bar & lounge.

Where to eat: B&O American Brassiere in Hotel Monaco features an approachable American brasserie menu by Chef E. Michael Reidt and a bustling happy hour at the bar. Get some Southern hospitality at Miss Shirley’s Café, an award winning, family-friendly restaurant that features eclectic Southern inspired dishes with a Maryland twist.

Located along the waterfront, Harbor East is one of Baltimore’s up-and-coming hot spots. Here, business people sit next to hipsters at the latest fusion restaurant. Independent films play at an art-house theater complete with a premium bar. Locally owned boutiques mingle with well-known, high-end storefronts. Luxury hotels and spas provide outstanding accommodations and welcome relaxation. If you like to be on the cutting edge with easy access to every amenity you might need, Harbor East is the place to stay.

What to do: Explore Baltimore aboard the Schooner Summer Wind, sailing from Harbor East Marina to Fort McHenry to see all the famous Baltimore landmarks from the Inner Harbor.

Where to stay: Visit Four Seasons Hotel Baltimore for your next retreat, where you can enjoy a harbor view from your room, relax in a heated whirlpool or escape in your private cabana, while receiving spa treatments from harbor salt scrubs to body wraps. The hotel’s Loch Bar is a classic Maryland Tavern known for its Inner Harbor views, raw bar, extensive whiskey menu and live music.

Where to eat: Cinghiale celebrates the richness and style of the Italian table. The restaurant serves as a gathering place for both business and social occasions, being in the center of downtown with a lively enotecta (wine bar) and an elegant osteria (dining room).

Named for the Englishmen who founded a ship-building company here in 1726 that would go on to produce the famous “Baltimore Schooners,” Fell’s Point is a spirited waterfront community in perpetual celebration of Baltimore’s British nautical roots.

What to do: Have an adventure with Urban Pirates aboard Baltimore’s only pirate ship, Fearless. The interactive voyage includes all things pirate for young and the young at heart, including searching for treasure and blasting enemies with water cannons.

Where to stay: Located in a historic building that used to be a tobacco factory, The Inn at Henderson’s Wharf is situated on the city’s waterfront with access to the Inner Harbor attractions by water taxi. You’ll feel like royalty having a personalized butler service – an unparalleled hotel amenity.

What to eat: Delight in sangria and sharable plates at Mezze, a traditional Mediterranean tapas restaurant in the heart of Historic Fell’s Point.

Today, Baltimore’s oldest neighborhood is the city’s cultural center with trendy boutiques, art galleries and cutting-edge restaurants. The Mount Vernon marketplace features hand-selected artisans in their area including Taps Fill Station, the first of its kind hybrid bar and filling station selling reusable containers for filling and refilling craft products such as beer, wine, coffee and artisanal oils – all on draft.

What to do: Soar above the city at the top of the Washington Monument. For a panoramic view of the Baltimore skyline, you can climb up the 227 marble steps stairs of this monument, which dates back to 1815. Visit the renowned Walters Art Museum and travel through 55 centuries by way of art – the museum showcases Egyptian mummies, Roman sculpture, medieval armors and holds the largest collection of Matisse works in the world.

Where to stay: Baltimore’s crown jewel is The Ivy Hotel, an 1889 historic mansion which re-opened in June 2015 as a luxury boutique hotel with a luxury spa and a fine-dining bistro, Magdalena.

What to eat: A local favorite, you won’t want to miss the rosemary garlic fries and the in-house craft brews at The Brewer’s Art – selected among America’s 100 best beer bars in 2015 by Draft Magazine.

This quaint neighborhood is picturesque with brick homes and cobblestone streets. With locally owned shops, galleries and the Cross Street farmer’s market, visitors are heartened by the charm of Federal Hill.

What to do: Experience American history at Fort McHenry National Monument, the site of the Battle of Baltimore during the War of 1812. This battle when American troops stopped a British invasion inspired Francis Scott Key to write the national anthem, ‘The Star-Spangled Banner’.

Where to stay: Built in 1801, Scarborough Fair is a cozy bed and breakfast just two blocks from the Inner Harbor. For book enthusiasts, reserve the “Edgar Allan Poe Suite” – the literary legend was a resident of Baltimore and you can even see his former home at the Edgar Allan Poe House and Museum.

What to eat: The Tasting Bar at The Rowhouse Grille offers a six-course tasting from an ever-evolving menu designed by chef Tess Mosely. You’re in for a pleasant surprise as seasonal ingredients and items don’t appear on the Grille’s regular menu, but expect local craft beer and the house specialty mussels, prepared in French bistro fashion, all year round.

This once blue-collar mill town is now rated number eight of Redfin’s Hottest Neighborhoods of 2016. Hampden’s main street, “The Avenue,” is known for its quirky shops and art galleries while the neighborhood also touts new craft breweries like Union Craft and Waverly Brewing Company.

What to do: The place where everybody affectionately calls you “hon,” Hampden is home to Honfest – the June festival that honors the city’s historic working-women. This local tradition has become a nationally recognized event covering four city blocks in Hampden.

What to eat: La Cuchara (one of Wine Enthusiast’s Top 100 Wine Restaurants of 2016) offers wood-fire cuisine inspired by the Basque region of France and Spain in an industrial-chic setting. Or try Woodberry Kitchen, a farm to table restaurant from James Beard Winner Spike Gjerde, features the best seasonal ingredients from local growers of the Chesapeake. Another not to miss restaurant is Cosima, a beautiful restaurant located inside the old boiler room of the Mill No.1, a building that has been nationally recognized for its renovation. The cuisine focuses on Sicilian and Southern Italian cooking.

There’s almost no better way to get to know all of Baltimore than a trip up Charles Street. A designated National Scenic Byway, Charles Street is a 12-mile trek that tells the story of the city. On foot or by car, you’ll encounter great shops and restaurants, along with some major attractions such as Station North Arts & Entertainment District and America’s First Cathedral.

Westside is full of entertainment, from nightclubs to the Hippodrome Theatre at the France-Merrick Performing Arts Center. The area is also the final resting place of Edgar Allan Poe, buried at Westminster Hall Burying Ground.

What to do: Catching a baseball game at Oriole Park at Camden Yards is a great way to spend a Sunday afternoon, soaking in the all-American atmosphere. The NFL’s Baltimore Ravens play at nearby M&T Bank Stadium.

What to eat: For a real taste of Baltimore, explore Lexington Market – since 1782, the market has provided meats, seafood and produce from local vendors, making it the oldest market in America.

Baltimore’s Little Italy draws visitors with its aroma of home-style Italian dishes from numerous restaurants, bakeries and delis. Aside from the food, Little Italy offers events, bocce ball and open-air cinema during the summer.

What to do: Every summer, Little Italy puts on an outdoor festival celebrating Saint Anthony and Saint Gabriele with delicious Italian food, a parade, games and contests— including a Roma Sausage eating contest and a cannoli filling contest.

Where to eat:  Let intoxicating aromas of garden-fresh basil and garlic-laden tomato sauce lead you to this authentic Italian neighborhood, which is home to more than a dozen cozy, family-owned eateries. Whether your tastes tend toward traditional and casual or innovative and upscale, rest assured that you’ll find a meal that is both homemade and heavenly. Try Ciao Bella Ristorante, La Scala or Da Mimmo’s Finest Italian Cuisine.

As you continue on your way out to Fort McHenry National Monument and Historic Shrine, you’ll pass through Locust Point, a charming peninsular neighborhood. Since 1868, when the first immigration station opened in Locust Point, immigration has been an important part of its history. The neighborhood once served as the center of Baltimore’s Polish American, Irish American and Italian American communities.

Pigtown was a community for railroad workers in the 1840’s — visitors can learn about its history at the Baltimore & Ohio Railroad Museum, located on Pigtown’s north side. Baseball fanatics will know Pigtown as Babe Ruth’s birthplace, while today it has enjoyed a reinvigoration that is making it increasingly attractive to families and business owners.

What to do: Put on your dancing shoes and visit Mobtown Ballroom, Baltimore’s premier location for social dance events, dance classes and live music.