“Where did I come from?” I used to think that would be the most complicated question. That was back when I was a grown up. My mind was doing backflips before the first conversation, but I was relieved to find this was an amazing opportunity to communicate. It is an easier concept when it is applied in simple terms, especially for kids in queer families with additional, concepts.

A friend of mine gave me a book written by Cory Silverburg and illustrated by Fiona Smyth. What Makes a Baby or I think, “what makes a conversation easier when you are talking about What Makes a Baby”, was perfect.

Outwardly it looks like a typical colourful, cartoon imaged deal explaining that the stork has become obsolete. However what makes this book so special and user friendly for any family is the fact that it is gender neutral. I really love how the conversation around biological gender and gender expression has translated to a new kind of golden rule in our house.

My late wife who was biologically a woman, but looked like a man, was the perfect opportunity to support the books theme; some bodies have sperm, some bodies have eggs and a uterus. That’s it. That’s all that matters, when it comes to what makes a baby. The genius lays in the unsaid golden rule. It doesn’t matter what someone looks like, because what is under their clothing is none of your business. However it does create an “in” for parents to talk about bodies.

When I told him that both his mama and I each had eggs and a uterus, it became a simple equation, sperm + egg + uterus = baby. So when the question became where did I come from, I asked him to recalculate. What was missing in his equation? His answer,

“Yes!” was my enthusiastic answer. “Sperm is what we call the magical ingredient!” This led to the fact that his body was like some of the bodies that this came from because he had sperm too.

“I have sperm in my penis?!” he asked me wide eyed. I had to cough through my laugh before I answered.

“No actually, they are in your testicles.” He looked down at his Captain America pyjamas and then up again.

“Really?! Which one?!” The conversation kind of dissolved from there in raucousness.

In any case The Ginger Menace is going to be six in March and I am proud that we have already had important conversations about body privacy, the ways people are born, where he came from, and now increasingly why bodies do what they do. Next on the list Cory Silverburg’s sequel Sex Is a Funny Word because, ah, yeah, no, yeah, I’m super ready. Gulp. 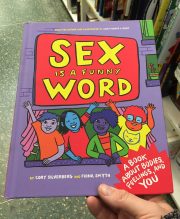