I may have been a tad self serving just now.  However shit does need to get done and sometimes the universe just accommodates you.  I have been meaning to clean out the cupboard under the sink for way longer than I care to admit. I have also been chucking used batteries under there for almost as long, with the intention of rounding them up for recycling. Enter intention that manifests a solution.

As The Ginger Menace has not done a mission for Earth Rangers since our long ago Bring Back the Wild campaign we decided to visit the site and see what kind of things were going on for kids that want to protect wildlife and the environment.  Bada bing bada boom, presenting The Battery Blitz Mission.

The Ginger Menace  was completely on board for anything Earth Ranger but he found the work involved a little on the distasteful side.  So I emptied, trashed, scrubbed, organized and when he saw the results I was rewarded by his “wow” face.  We could then see just how many batteries were going to be included on our “what to recycle list.”

We got down to some serious business of counting by tens to see how many used batteries had been compiled under the sink,  along with the other things I need to find a safe way to dispose of like aerosol cans (wince), light bulbs, paint and old caulking material.  I have been thinking a lot about how much waste we produce.  In 2009 Canada produced 777 kg of garbage per citizen while across 17 countries also studied the average was only 578 kg. This is according to the CBC News article Canadians Produce More Garbage Than Anyone Else written in January of 2013. Not a fabulous legacy.

According to Earth Rangers Canadians threw out 745 million batteries in 2010, instead of bringing them to safe disposal sites. That meant that they all went into a landfill and have possibly letched out into the environment harming habitat and animals. This has prompted the action of companies such as CalltoRecycle  to increase the number of battery drop off locations in Canada. Apparently they collect over 5 million batteries a year which if you want to know is the weight of over 1000 elephants. 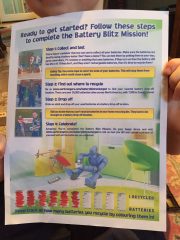 So maybe I’m not so self-serving after all. I am so glad that there is an organization out there to help kids understand what making a difference really means in the larger picture for all of us and some neato rewards don’t hurt!  Join us in the The Battery Blitz Mission running until March 13th. Also  here’s a tip for you and your little Earth Rangers to help you reduce your amount of household waste and led them to a life of reducing, reusing and recycling! 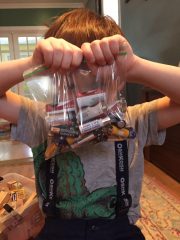 Recycling Tips for Earth Rangers and Their Parents