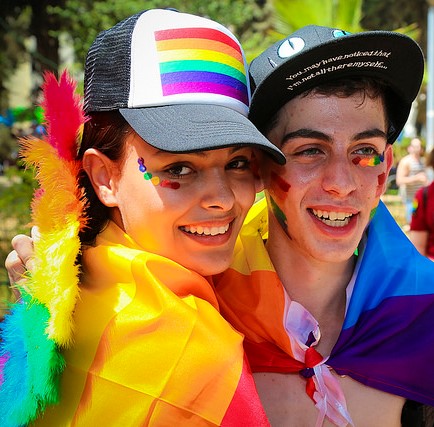 The City of Tel Aviv-Yafo is excited to announce that the theme of the 2017 LGBT Pride Parade is “Bisexuality Visibility” The parade will be the first large-scale pride parade in the world to ever celebrate the theme bisexuality.

Starting June 3, hundreds of thousands of people from Israel and around the world are expected to descend on Tel Aviv for a nonstop week of parties, events, and shows that feature and celebrate the city’s vibrant LGBTQ community, culminating in a massive parade through the city streets on June 9, expected to draw some 200,000 participants. Tel Aviv’s pride parade is the largest pride event in Asia and the Middle East, and one of the largest parades in the world.

Every year, members of Tel Aviv’s LGBTQ community choose a theme for the week of events in June. Past themes include last year’s “Women for a Change” and “Transgender Visibility”.

This year, the city’s LGBTQ community has chosen a theme that reaffirms its support for the diverse and inclusive atmosphere that has led to Tel Aviv being dubbed “the world’s gayest city” by The Boston Globe and “the gay capital of the Middle East” by Out Magazine.

The Tel Aviv Pride Parade is the only pride parade in the world that is fully sponsored by the Municipality. Over the last few years, Tel Aviv has significantly deepened its investments to promote gay tourism to the city, and an estimated 35,000 tourists are expected to arrive this year in Tel Aviv to take part in the pride events.

This year, the Municipality is collaborating with NYX Tel Aviv, the official Pride hotel. NYX Tel Aviv will offer special deals and host events organized by the well-known gay party line PAG.  The Hotel will be lit up in rainbow colors throughout Pride Week.

Efrat Tolkowsky, Tel-Aviv Yafo City Council Member, In charge of LGBTQ Affairs: “Both in Israel and around the world, many bisexual people feel that they are an invisible group within the LGBTQ community. Here in Tel Aviv, we are committed to celebrating each and every LGBTQ person and ally equally, so that we can all be out and proud together”.

Yaniv Weizman, Tel-Aviv Yafo City Council Member, In charge of LGBTQ Affairs: “Every year tens of thousands of the LGBTQ community from around the world visit Tel Aviv-Yafo. We are proud to have them join us during pride week celebrating the diversity and spirit of tolerance that makes Tel Aviv the best gay city in the world”.