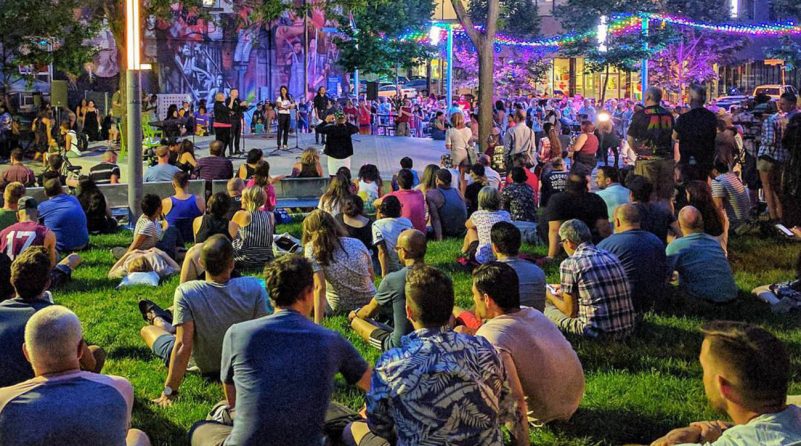 There were many opinions about Toronto’s Pulse memorial and vigil event which took place on June 12th at Barbara Hall Park. With this emphasis on how communities are represented and this being the first time that this kind of Latinx space was created, it’s understandable that this would at once be a memorial, homecoming and safe space to celebrate the fact that the space was by and for the Latinx community. This was a space to heal from the massacre in Orlando, while also finding comfort in a space that had never been created the way it was at Barbara Hall Park that evening.

Those belonging to the Latinx community noted that this memorial held meaning beyond the Orlando massacre. One Argentinian member of the community, Andres Ignacio Torres commented that, “The blending of Latinx culture and queerness was profound to me. The highlights for me were definitely the Spanish speakers, spoken word poets, the indigenous speaker whose attendance was very important as the Canadians that we are, and just the community vibe that night in general.”

When asked about what the issues were, he also noted, “The only issue I had with the evening were these two White men who were drunk and abusing the space by shouting things about cops needing to be at Pride and “all lives matter”. It brought a few people to frustration and tears and it thoroughly upset many of us. Other than that I didn’t have any issues with the evening.”

Torres however, had other sentiments about the night. “I have heard some of the issues regarding the entertainment and food establishments that were present, and I don’t necessarily agree that their attendance was problematic. The organizers tried to bring the community together by doing what Latinx people do, which is celebrate our culture.”

Torres commented, “There is so much pressure when handling events that surround an impact on a marginalized community, and rightfully so. Especially when people of colour are involved, there needs to be extra care in how it is presented, and individuals of said communities must be part of the organizing process to avoid any misrepresentation of what’s important to them. This is just due to a product of misrepresentation and rough history surrounding People of Colour and any marginalized community. We are still fighting for representation so we must make sure it is the right kind.”

Torres was emphatic though, about the fact that it was a space for everyone, when asked about some of the sentiments that White folks felt unwelcome. “The entire LGBT+ community was shaken to its core by the events at Pulse. Yes, the Latinx community was hit the hardest, and yes many were Latinx people of colour, but when it comes to grieving, I believe we all need to stand together when our communities get hit like this, because death unites us all and this reminded us we are all human and bleed the same blood. As a White-passing Latinx person, I would personally feel offended if I were asked to leave because I wasn’t dark enough.”

He went on to emphasize the importance of keeping the space open to all, “My Latinx culture and heritage has been questioned my entire life. My parents were both born in Argentina and my first language was Spanish. I am treated like any White person until they hear me speak Spanish or they see my name on my resume. I am then seen in a different light and treated drastically different. I deserve my place with my Latinx community and no one can tell me otherwise.”

There were some however, who believed that the night could’ve gone differently. It’s hard not to wonder whether it was simply a difference in cultural understanding and knowing what this particular event might mean for the community, beyond the Orlando memorial.

Trans and non-binary educator and advocate, Rachael Kriss noted however, that “I attended the ‘memorial’/vigil as I wanted to show my support and share my feelings of grief with my local community in solidarity with the victims and families and all those affected by the events of last year. The reading and unveiling of the mural was moving. Being a ‘White Trans woman’ I felt less than welcome.”

Francois Gaudreault, who organized the memorial and vigil last year after the horrific events transpired, posted the following on his Facebook page after this year’s event – ” I apologize for encouraging you to go to the most thoughtless, disrespectful, and insulting memorial that has ever been held.” He also stated, “Next year I promise an actual memorial that will honour and respect the victims.”

Going into the last few weeks of Pride Month, it’s worth considering whether just making space is enough and whether or not allies and accomplices need to keep a mind that’s as open as the spaces QTBIPOC communities occupy.

If we are to truly include everyone, we must make equal space for all parts of a community, especially when it may not look as familiar as that to which we’re accustomed. The night of the event, the real story was about how our community collectively carries the weight of violence, like the shooting at the Pulse nightclub that Latinx night.

When we get into issues of who is best suited to tell the story of grieving hearts, other than communities who were predominantly impacted, simply on the basis of how it appeals to everyone, we run the risk of tuning out the voices of those most impacted, in favour of stories that are more familiar.

Torres, though not able to speak for the entire community, summed up the experience well, based on several social media posts, when commenting that, “I honestly was impressed with the approach to the evening. I did not think Toronto would take as much care as they did in having all shades of Latinx voices represented. Not only did they cater to the Latinx community by having Spanish speakers, but they also had a Portuguese speaker and an ASL communicator.”

Grief is a heavy weight to carry, and especially after Orlando. We’re all reminded of the fact that it’s not the differences in how we do it, but the fact that we are the same in the face of violence like that which motivated the Pulse shooting.

Editor Note: Huffington Post article on the use of the term Latinx, as opposed to Latino or Latina.