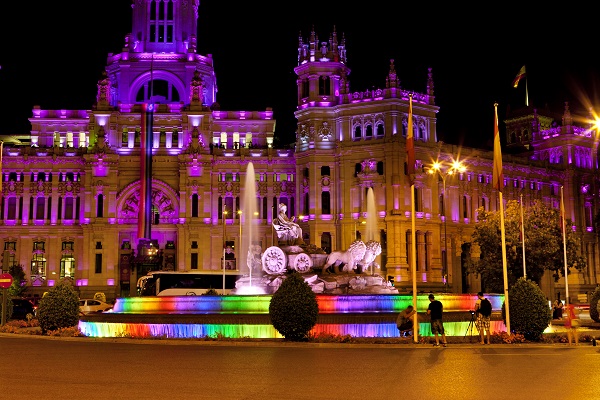 Is Madrid the Gayest City in the World?

According to a recent pole by Nespick, an organization that helps individuals relocate to cities around the world, Madrid ranks number one as a place that LGBT individuals would be most welcomed. For a city to rank strongly as an LGBT destination, it must have a vibrant gay dating scene, a lively alternative nightlife, open minded citizens, and low levels of hate crime, as well as taking into account the national laws affecting the LGBT community, such as the right to get married or adopt children.

This past summer Madrid also was the host city for the largest Pride celebrations ever held anywhere in the world, attracting some three million visitors over a one week period during WorldPride 2017, which took place June 23 to July 2, 2017. The WorldPride event was actually a combination of Madrid’s annual Pride festivities, as well as EuroPride, marking the first time in history all three culminated into one huge event. Several cities have previously hosted WorldPride, including Rome, Jerusalem, London and here in Toronto, but this gathering of the gays was above and beyond. 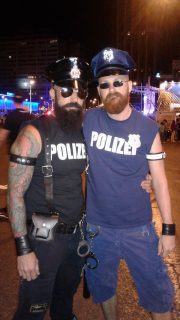 In recent years Madrid has become a top destination for LGBT travellers, and it’s easy to see why. Not only is it a first-class tourist and cultural destination, but it’s also a fun, friendly and tolerant city where diversity is a defining feature of everyday life. The Madrid Pride festivities, considered to be among the best in the world, are when these attributes truly shine bright as the city is literally lit up everywhere with the colours of the rainbow.

There were stages set up throughout the city, several kilometres apart, making it truly a city-wide festival not segregated to a so called, “gay village”. The Chueca neighbourhood is known as the gay area, and offered up one of the many stages of programming, along with being the go-to nightlife spot throughout the festival. It’s much more than a neighbourhood, as it’s often held up as an example by the LGBT movement the world over. This is hardly surprising as it was the point of origin of what has become an unstoppable shift towards visibility, a way of life based on respect. Its very name evokes the principles of freedom, respect and tolerance.

A few decades ago a number of bars, restaurants and multiple businesses specializing in the LGBT market, such as bookshops and fashion boutiques, began to open in the neighbourhood. Some of these are now iconic establishments: the Berkana bookshop, Café Figueroa and the Black and White club, among others. The neighbourhood is one of Madrid’s most cosmopolitan and vibrant areas with both Plaza de Chueca and Plaza de Pedro Zerolo being at its core, the latter being renamed in 2015 in honour of one of the activists who was instrumental in bringing equal rights to the LGBT community in Spain.

Other parts of the city worth exploring are, Malasaña, which is the heart of the city’s indie scene and home to up-and-coming creative artists, and Salesas, which has a spirit that lies somewhere between chic and bohemian. These two adjacent, multicultural neighbourhoods are among the city’s oldest, and the rich ethnic diversity of their streets has made them an example of integration without compromising their authentic and traditional Madrid character. Many new LGBT-friendly establishments have chosen to set up shop in La Latina, the most popular neighbourhood for a fun Sunday out in Madrid. Lavapiés is also home to a thriving alternative gay and lesbian scene.

WorldPride literally could be experienced pretty much everywhere within the central core, with several other areas offering music, dance, performing arts, visual arts, literature, sporting competitions, talks, children’s activities, and more. Of particular note were the International Human Rights Conference, Pride Park, and the International Festival of Culture, which each offered unique and informative programming.

The main event that the entire city waits for is the Pride Parade, which begins late afternoon and continues well into the evening hours with hundreds of double-decker buses carrying scantily-clad revellers dancing to boomtastic beats throughout the main streets of the city. The Parade route travelled along Paseo del Prado, one of Madrid´s main streets. starting at Atocha Station and ending in Plaza de Colón. It’s certainly a sight to behold and one that will not soon be forgotten.

The local public transportation system also made it fun and easy to get around, fully decked out with Pride messaging, including one subway station completely draped in rainbow colours. The underground system also ran 24-hours the final night of the festivities, allowing revellers to get home safely. For those who walked the streets, which were millions (no joke), the streetlights in the downtown core also sported same-sex couples in flashing green and red. Even City Hall was brightly lit up each evening, another shining example of the inclusiveness of this city. 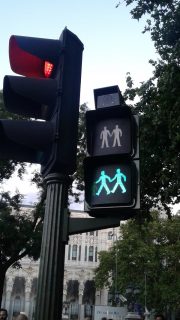 In terms of protecting LGBT rights and equality, Spain boasts some of the most progressive legislation in the world. Same-sex marriage was legalized in 2005, making Spain the third country in the world to recognize this. All of this is strongly in evidence in the capital, which is a benchmark for many countries where full equality has yet to be achieved. As well, this is extra special year for the LGBT community, as 2017 marks the 40th anniversary of the first LGBT Pride demonstration in Spain.

“It’s no coincidence that the world’s most exciting cities have a strong LGBT community, contributing much to the dynamism, openness and prosperity which defines locations such as Madrid, Amsterdam and Berlin”, states Ömer Kücükdere, Managing Director of Nestpick.

This certainly stands true with Madrid, whose tagline is “Wherever you’re from and whoever you love, Madrid loves you.” Direct and effective!

Spanish 80’s Europop duo, Fangoria, were just one of the many local acts who performed at WorldPride, with their song A Quien Le Importa (roughly translated as Who Cares What I Do), having become somewhat of a local gay anthem.

Hotel recommendations in Madrid include H10 Villa de la Reina, and the gay-owned Oscar Hotel., part of the Room Mate brand. Visit Madrid Tourism and Spain Tourism for all your travel needs. Also check out these suggestions for Alternative Culture in Madrid. 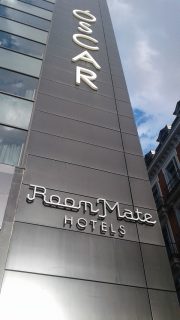