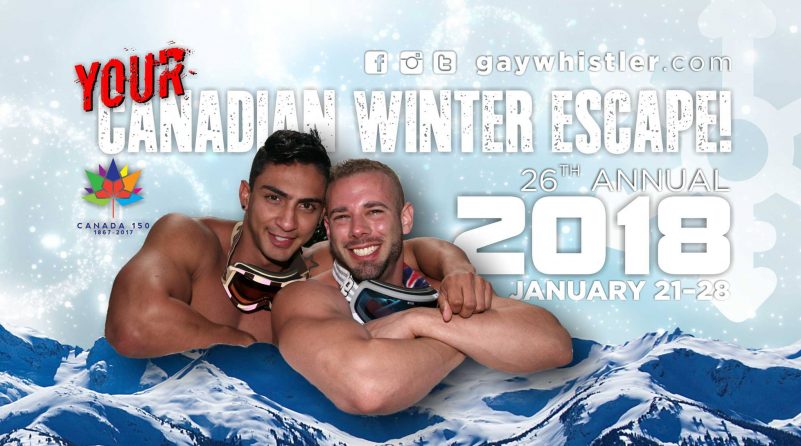 The award winning resort of Whistler Blackcomb is all set to host the 26th annual Whistler Pride and Ski Festival January 21-28, 2018. Whistler Pride is one of the largest in the world and biggest in Canada attracting men and women from 26+ countries for the week long celebrations on and off the slopes. The festival has four key elements that include: Sports, Culinary, Health & Wellness, and Entertainment.

Everyday Whistler Pride assembles a gaygal of experienced skiers and snowboards ready to take the snomosexuals out on the slopes of Whistler and Blackcomb. The Whistler Pride ski/snowboard guides expertly place the pride guests into similar skiing/riding abilities so everyone can enjoy the awesomeness of the 8,176 acres this skier’s paradise has to offer (It is North America’s biggest ski resort so it can be a wee bit intimidating on where to ski). There is no other ski guide program like it on the planet and is one of the key events that truly sets this gay ski week apart from all others.

Other sporting events at Whistler Pride include a daring slide on the world’s fastest track, the Whistler Sliding Centre, where you have the opportunity to try your skills at skeleton or bobsled and imagine yourself at the Winter Olympics! A fan favourite is whipping through the forest on a zipline where you can chase your friend on parallel lines with SuperFly Ziplines. Whistler Pride also offers snowmobile tours, dog sledding, Nordic Skiing and snowshoeing.

Whistler is well known for its award winning restaurants including the Bearfoot Bistro, Araxi, 21-Steps Kitchen & Bar, and Alta Bistro just to name a few. During Whistler Pride the Bearfoot Bistro’s Ketel One Ice Room (Vodka tasting) is always a big hit. Last year the festival offered a special wine paired dinner at the Cellar by Araxi which sold out in three weeks. The festival organizers are excited to reveal this year’s special dining events in early December!

Whistler Pride is the first mountain resort to offer a pride parade that starts on the mountain where parade participants ski down the mountain with Rainbows, Trans Flags and colour costumes and then marches through the village to the Whistler Olympic Plaza. It was in February 2010 when Whistler Pride and the Pride House team marched for the first time during the Winter Olympics to hold a press conference to defend Johnny Weir after homophobic remarks made by Olympic Sports commentators. The tradition continues and every year the parade grows and becomes more and more colourful.

In total Whistler Pride offers eight days and over 65 events that showcases some of the best queer talent internationally and locally. This year Whistler Pride welcomes back The Cube Guys (Italy) as the headliner for the main event on Saturday, January 27th at Snowball26 – a mega dance party closing out the week long celebration. Making his Western Canadian debut is Superstar DJ/Producer GSP (Greece) headlining the naughty and bit racy Furrocious – Military Bear Ball on Friday, January 26th. Join us January 21-28, 2018. For more information visit gaywhistler.com

The Cube Guys (Italy) returning for an encore performance at Snowball26 on Saturday, January 27, 2018. Last year Whistler Pride welcomed the Italian duo to the mountain resort. Roberto Intrallazzi and Lucas Provera kept the dance floor pumping until 4AM. Many of the regular pride guests all said they were without a doubt the best they have ever experienced. Executive Producer and Entertainment Director, Sunil Sinha said,

“We are so honoured that The Cube Guys are making the trek back to Western Canada to perform at our Main event. The high energy vocals and beats the guys played was just perfect for our audience. We can hardly wait to see what they have in store for us this year!”

Superstar DJ/Producer GSP (Greece) will be making his Western Canadian debut at Whistler Pride. Fresh off the circuit from Taipei Pride, DJ GSP is pumped to spin at this year’s re-imagined Furrocious Military Bear Ball on Friday, January 26, 2018.

The 26th annual Whistler Pride and Ski Festival is a week long winter celebration of diversity both on and off the slopes.The festival  combines sports, culinary, wellness and spectacular social and cultural events at the award-winning resort of Whistler, British Columbia from January 21-28, 2018.

A copy of this year’s festival guide can be found here.