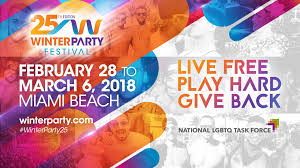 Winter Party Festival – the iconic week long celebration of LGBTQ people from all over the world  is back for its 25th year, and will once again take place in one of the world’s hottest destination, South Beach, Miami from Wednesday, Feb 28 to Tuesday, March 6, 2018.

Founded in 1994, the original Winter Party featured just one event and one of Miami’s first mega-dance party ever held on the beach. The combination of surf, sand, muscles, music and weather, proved irresistible. Soon, thousands of men were pouring in from around the world, making this one of the hottest weekends on the gay travel calendar.

Over the years, Winter Party has grown to include a week-long celebration with dozens of events, from shopping expeditions to museum crawls, and parties, parties and more parties. The roster of international DJ talent and Miami’s unparalleled clubs provide the kind of parties that could never happen anyplace else in the country.

Best of all, the entire proceeds go directly into the community. The National LGBTQ Task Force, the event’s producer, donates a significant portion of the proceeds to local LGBTQ groups. In 2017, the Task Force donated a record-breaking $300,000, and over the years the total has been close to more than 2.7 million.

This year to mark the 25th Edition of Winter Party Festival, the team has elevated all aspects of the events to make it even more special than any other years.

The elegant VIP Cocktail Reception will honour some of the individuals who have contributed to making Winter Party the growing phenomenon that it is today. ArtScape will feature notable and emerging artists work, while the Under the One Sun Pool Party will be hosted at one of South Beach’s biggest pool at the Kimpton Surfcomber, the Host Hotel for 2018.

The hottest ticket in town will be the iconic Beach Party held on Sunday, Winter Party Festival’s biggest and most popular event and the crown jewel of the festival, hosted by favourite DJ duo ROSABEL comprised of DJs Ralphi Rosario and Abel.

To continue the big 25th year milestone celebration, the Festival has moved its Sunday night party to the James L. Knight Center – a world-class multipurpose entertainment complex located in the heart of downtown Miami.

For the fantastic Sat-Sun night lineup, Winter Party has partnered with Masterbeat who specializes in conceptualizing and producing theme events and curates every aspect of the event with special costumes, interactive visual elements, guest interactions and more.

So dust off that snow and clean out those dancing shoes. Its time to leave the cold behind and join the Winter Party celebration in Miami Beach!