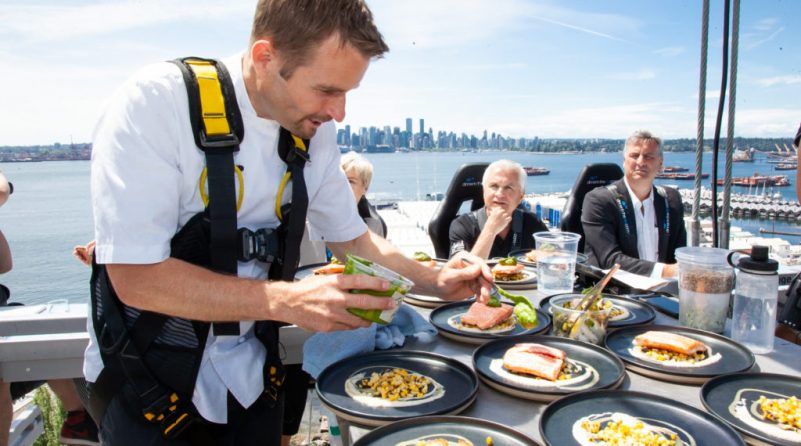 Review: Dinner in the Sky Vancouver

The day I was booked for Dinner in the Sky Vancouver, I got a call advising me that the time I was confirmed at was changed to the later dinner time. No reason was given. Upon arriving, I heard from others that the same thing had happened to them. I inquired with the staff and was told there weren’t enough booked for the time I was confirmed at, so all three dinner times were combined into one, and even then the seating was only half full. It should be noted that this was early in the season, and also a weekday, but it did seem the company might be being a bit over zealous with their offering of a couple of lunch and dinners each day, as well as added brunch slots on weekends, and special Happy Hour in the Sky.

The menu is curated by Chef Ned Bell, known for hosting seven seasons of Cook Like a Chef on Food Network Canada. All items are locally sourced from start to finish, with the dinner menu including Pacific salmon and other seafood dishes, while meat eaters can enjoy the organic beef strip loin, and there’s also a vegan option as well. Sounds good, but for $399.00 per person ($569.00 VIP with wine pairing), it is on the pricey side, especially when it all must be consumed in the one-hour time period slotted in the air. Apparently sales might not be doing so well, as there was a special 50% off offer for July 14 to 20 reservations. I’d keep an eye on the website for additional promotions throughout the run in North Vancouver.

Upon “lift off” from the ground, the table is hoisted into the air, and is then manually maneuvered by one staff member on the ground who pulls a rope back and forth, round and round, allowing diners to view Vancouver’s skyline. That’s if there’s any time to enjoy the skyline, as the meal is rushed from start to finish, with the first appetizer already plated and waiting for you when you are seated. There were a couple instances where the servers were asking if people were done their meal, when they took a couple seconds to look around or chat with their dining partner. Another individual asked to take the remainder of their main course home, because they were already onto desserts. The entire time in the air is 60 minutes, and to serve 22 diners (when at capacity) in that time is obviously a challenge on the staff, but perhaps an added 15 minutes might let diners enjoy themselves a bit more.

Speaking of the staff, it seems that summer students were hired with not one individual responsible for overseeing things. Apparently Ned Bell goes up on certain dates, and his other chef, Evan, does as well on occasion. Neither were there when I went. The music played from the “bartenders” phone was all over the map, from disco to hip hop, and very choppy. They cut the music abruptly to switch to another tune, and the volume alternated between too loud and not loud enough. No one needs to dine listening to the Bee Gees or Led Zeppelin!

Finally, the later time I was moved to was deemed “Premium” as it took place during sunset. Unfortunately, by the time you’re in the air, the sun has already set behind the mountains to the west, so don’t expect to grab any Instagram snaps. In fact, the setting sun darkens many of the images of Vancouver’s skyline at that time of night. The staff really try to help by offering to take some pictures, but their photography skills are something else that might need sharpening up.

Overall, the concept is great, the value for the money is not, unless you snag one of their 50% off offers. I’d suggest if you want the elevated experience, go for the “Happy Hour in the Sky” for $149.00 that gives you canapes and a glass of wine, as well as dessert in the sky. You get 45 minutes in the air, as opposed to an hour, but you only have the dessert to work on, and the rest of the time can be spent enjoying the views.

Dinner in the Sky North Vancouver is on now through July 28, at 415 West Esplanade, North Vancouver, where a private reception areas is set up to lounge in prior to dinner. The experience will then move to West Vancouver from August 4th to September 3rd.

More info and bookings details can be found here.