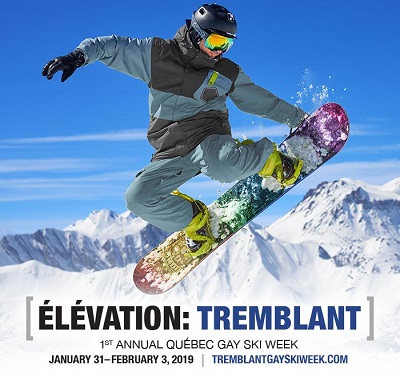 ELEVATION becomes the largest series of annual LGBTQ ski and snowboard events in the world with a third location in Quebec. LGBTQ skiers and snowboarders will now have three weeks, three locations, and three times the fun with ELEVATION MAMMOTH in California, ELEVATION UTAH in Park City and ELEVATION TREMBLANT in Quebec.

After 16 years of promoting ELEVATION Mammoth, one of the largest gay ski weeks in North America, and 8 years of ELEVATION Utah in Park City, event producer Tom Whitman announces a new addition to the winter gay ski calendar with ELEVATION Tremblant in Mont Tremblant, Quebec. ELEVATION offers gay skiers a chance to play hard both day and night with great skiing, great parties, and great company.

With the addition of the new ELEVATION, Whitman expects more than 5,000 attendees between the three events. By itself, ELEVATION Mammoth is already the third largest gay ski week in the world and with the addition of Utah, the combined crowds will make ELEVATION the largest gathering of gay skiers in the world by a single promoter. “We created ELEVATION at Mammoth Mountain over sixteen years ago, and eight years ago expanded to Park City for ELEVATION UTAH. Each year, we have watched the events grow in attendance. But the East Coast was one area where we have always wanted to expand. And Tremblant is the perfect place for Elevation – always ranked one of the best resorts on the East Coast, with very easy access from Toronto, Montreal, Boston, and NYC.”

“With the addition of Tremblant, we can now offer gay skiers more choices all across North America, in the best places to ski,” says Tom Whitman. “Our goal for each ELEVATION is simple: Great skiing, amazing parties, new friends, and memories that will last forever.”

ELEVATION Tremblant will kick off the inaugural year from Jan 31st to February 3rd 2019. “I am so excited about our newest Elevation. It will bring LGBT skiers from Canada and the East Coast to an amazing destination. Not only is Tremblant one of the best ski towns in North America, Quebec is an amazing place to visit not only for the Quebecois culture and the natural beauty, but also for its welcoming attitude towards the LGBTQ community. The community of Mont Tremblant is beyond thrilled to be welcoming the event,” says Tom Whitman. “And I’m not going to lie, the friendly and sexy Quebecois and Toronto boys and girls don’t hurt.”

ELEVATION Tremblant will feature apres-ski and night-time events over 4 days, with go-go dancers and DJs from LA, London and Montreal, and themed events, including the Onesie Apres-Ski, the Neon Party and the naughty GEAR party. And of course, hundreds of sexy snowboarders and skiers from NYC, Montreal, Toronto and beyond.

And Tremblant is getting excited as well. “We are eager to welcome the whole community”, said Annique Aird, VP of Sales, Marketing and Communications for Station Mont Tremblant, “and are very happy to partner with such a quality producer as Tom to bring an LGBTQ event to Tremblant!”

Some of the biggest LGBT travel influencers will be joining us in Tremblant including Max Emerson, Andres Camilo, Eastsiders’ Kit Williamson and John Halbach, and Amazing Race Canada’s Kristen McKenzie and Steph LeClair.

Tremblant is a top four-season resort destination owing to its guest experience both on-mountain, and in its pedestrian village. Its views of the Laurentians, the diversity of its offer and highly acclaimed major events – of which IRONMAN Mont-Tremblant, 24h of Tremblant, Wanderlust and the Tremblant International Blues Festival – put it in eighth position among North American ski areas by Condé Nast Traveler readers in 2016, among the top 25 best ski villages in the world in 2014 according to National Geographic, in addition to being voted #1 Ski Village in Eastern North America for a 19th year by SKI Magazine readers.  Tremblant welcomes vacationers on direct flights from Toronto with Air Canada and Porter Airlines, to enjoy amazing hotel establishments, over 75 restaurants, boutiques and a Casino, all at nature’s doorstep.

For more information on ELEVATION TREMBLANT, or any ELEVATION event, visit: elevationgayski.com 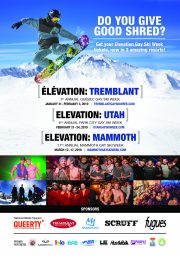 ELEVATION Utah returns to Park City for the 9th annual “gay invasion of Utah,” with DJs, go-go dancers and themed events including the Onesie Party, the Neon Party, the naughty GEAR Saturday night and the signature Elevation apres-ski events. ELEVATION Utah draws attendees from all over the country for the best snow in the world, to an area packed with world-famous ski mountains, including Park City Mountain – now the largest ski resort in the US. and gay events on Main Street in one of the most iconic ski towns in the world.

“I have had some of the best ski days of my life in Park City. Utah really has snow like no other. And there is something very special about a week of big gay events right on the Main Street of one of the most iconic ski towns in the world,” says Tom Whitman. “And I would put the crowd at our Saturday night as one of the sexiest and friendliest of any gay party in any city.”

For more information on ELEVATION UTAH, or any ELEVATION event, visit: elevationgayski.com

ELEVATION Mammoth will take place March 13th – 17th and will feature a collection of thirteen events over five days. The ski by day/play by night weekend starts from the moment guests arrive at the resort with daily events including après-ski and evening parties. Highlights include the signature apres-ski parties, including the themed Onesie Apres-Ski, the naughty night-time GEAR party, Comedy Night, and a VIP wine tasting. The parties at ELEVATION Mammoth will showcase headlining DJ’s including the Perry Twins, Josh Peace, Dawna Montell, Aaron Elvis and Adam Turner, who are joined by energetic go-go boys and dynamic drag queen hostess’.

“The key to the longevity and success of the Elevation events is the attitude of the attendees,” says Tom Whitman. “Or rather, lack thereof. We specifically encourage everyone to leave any “city attitude” at home, to be friendly and to introduce yourself to new people. And every year, people return because of the friends they have made and the connections they have forged. Some of our attendees have been to an Elevation event more than 15 times. We have Elevation marriages, we even have Elevation kids! But mostly, you’ll meet hundreds of fun, friendly, hunky guys (and girls) that you’ll want to stay in touch with.”

For more information on ELEVATION MAMMOTH, or any ELEVATION event, visit: elevationgayski.com

Tom Whitman created Elevation sixteen years ago in Mammoth Lakes to provide an alternative to the gay party scene in the great outdoors, and built the brand into the largest LGBT winter sports gathering in North America. Tom Whitman Presents is a premiere LGBT promotion company, having produced more than 2000 events over the last 15 years, including Wonderland – the largest LA Gay Pride event held on the backlot of Paramount Studios, the infamous celebrity hot spot Cherry Pop, the long-running SIZE Sundays, and the ELEVATION gay ski weeks in Mammoth Lakes, CA, Park City, UT and Tremblant, Quebec. He is on the Board of Directors of GLAAD, APLA Health and has produced events for many LGBT charities, including HRC, The Trevor Project, GLAAD, Aids Project Los Angeles, The LA Gay & Lesbian Center and more.