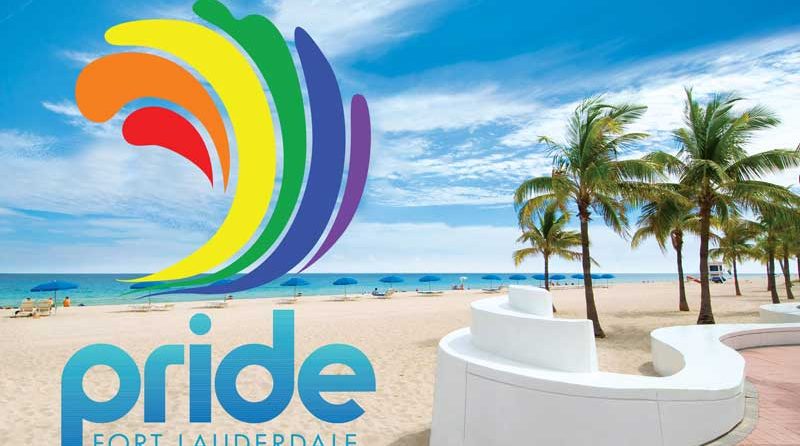 Pride Fort Lauderdale will be celebrated Feb. 21 – 24, 2019 under the theme of “Carnaval,” a salute to the colorful culture and traditions of the Caribbean and Latin America. This lends perfectly to the launch of the first-ever, “Pride of the Americas 2020“, to be held in Fort Lauderdale next year. New this year, Pride Fort Lauderdale is introducing a parade to the festival line-up. This will be the very first parade in Fort Lauderdale history held on State Road A1A along the beach. The parade will begin at 5:30 p.m. on Saturday February 23, from Windamar Street and proceed down the northbound lanes of SR A1A to Fort Lauderdale Beach Park. In keeping with the theme, “Carnaval,” all entries are encouraged to incorporate the festive style of Caribbean and Latin American Carnaval festivals into their vehicles, outfits, and activities. Think creativity, choreography, and costumes. Pride Fort Lauderdale is the oldest Pride celebration in the state of Florida.

One of the grand marshals will be Miss Major Griffin-Gracy, a transgender activist who was in the Stonewall Inn in Greenwich Village during the historic 1969 police raid that sparked the modern LGBT+ rights movement. “American Idol” fan favorite Ada Vox, who also made history as the first drag queen to advance to the final 10 contestants, and singer, choreographer and “RuPaul’s Drag Race” judge Todrick Hall will headline the festival on Sunday, Feb. 24.

FRIDAY, FEB. 22
Pride on the Drive – 6 p.m.
On Friday night, the party moves to Wilton Manors where dozens of bars, restaurants, and shops will be rolling out the rainbow carpet for a casual celebration in the “gayborhood.” Enjoy drink specials, discounts and live entertainment at participating businesses, all night, up and down Wilton Drive.

Stonewall National Museum & Archives Gala – 7 p.m.
Stonewall National Museum & Archives observes the 50th anniversary of the Stonewall Riots at their annual gala at the Ritz-Carlton Fort Lauderdale Beach. Actress and activist Kathy Najimy (“Sister Act”) will be the guest speaker for the gala, which also includes a silent auction, dinner, and entertainment. Click here to reserve your tickets today.

SATURDAY, FEB 23
Drag Brunch – 11:30 a.m.
Pride Fort Lauderdale is teaming up with the South Beach Wine & Food Festival for a fabulous drag brunch at the Ritz-Carlton Fort Lauderdale Beach. National radio personality Elvis Duran will be your host, along with his fiancé Alex Carr and MC Shawn Palacious (aka Kitty Meow). Enjoy delectable dishes created by local celebrity chefs and performances by the region’s top drag queens. Tickets are $125 each. Click here to reserve your tickets today.

B3: Bear Beach Bash – 12 p.m.
Party the afternoon away with music and entertainment by “My Big Funny Peter,” the world’s first gay muscle bear comedian, Peter Bisuito, as your host. Hot muscle bear go-go dancers and more on the Sebastian Beach stage! Get there early and you’ll be in a prime location to watch the very first Pride Fort Lauderdale “Carnaval” parade, too! Best of all, it’s FREE!

Carnaval Drag & Dine Parties – 12 p.m.
The festival gets started early at the many hotels and restaurants along SR A1A (and you can beat the traffic for the parade). Participating businesses will be offering entertainment, drink and food specials all afternoon. 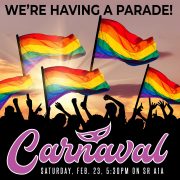 Pride Block Party – 7 p.m. – 10 p.m.
After the parade, head to 5th St. and SR A1A for a rockin’ block party. Dance the night away while enjoying live performances by your favorite local drag queens, musical acts and internationally-acclaimed DJs.

More than 50,000 people are expected for the festival. FREE admission, $5 donation requested at the gate. Read about the history of Fort Lauderdale/Dale County Pride here.

Greater Fort Lauderdale is also home to one of the largest Pride Centers in the country, the world’s first AIDS museum, the global headquarters of the International Gay & Lesbian Travel Association, and the Stonewall Museum, one of the only permanent spaces in the U.S. devoted to exhibitions relating to LGBT+ history and culture.

Greater Fort Lauderdale has been popular with the LGBT+ community for decades, welcoming 1.5 million LGBT+ visitors who spend $1.5 billion annually.