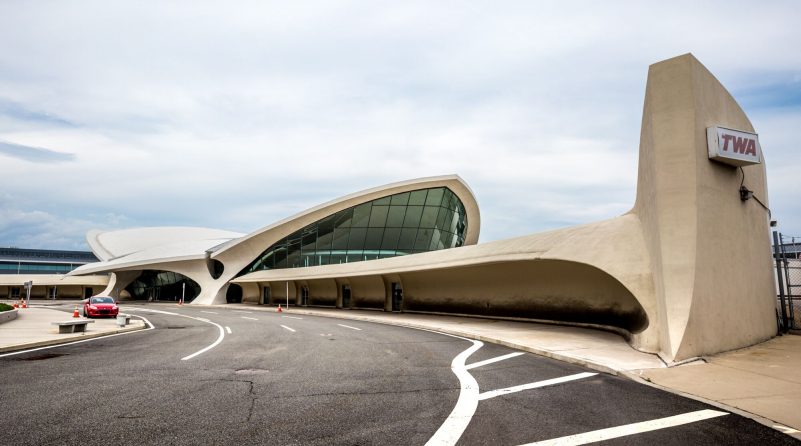 The world-class 512-room TWA Hotel, which has been closed to the public since 2001, will open its doors on May 15, 2019 as a soft opening, with a full grand opening to officially take place in the fall. Restoration costs are estimated at approximately a $265 million privately funded investment, which includes reviving and rehabilitating the Terminal’s iconic interiors by Charles Eames, Raymond Loewy, and Warren Platner. The project also includes an innovative museum showcasing New York as the birthplace of the Jet Age, the storied history of Trans World Airlines and the Midcentury Modern design movement.

Featuring LEED design, two hotel structures housing the guest rooms will be set back on either side of the terminal, situated and designed to defer to the historic landmark. Hotel guests and passengers from every terminal will be able to reach the TWA Hotel via the AirTrain, as well as through the iconic Saarinen passenger tubes that connect directly to Terminal 5.

The hotel will also contain 50,000 square feet of meeting and event space, a 10,000 square foot observation deck where guests can watch planes takeoff and land, the largest hotel lobby in the world, and eight food and beverage outlets including the revived Ambassador’s Club, Lisbon Lounge and Paris Cafe.

A TWA Lounge is open on the 86th floor of One World Trade Center, designed to preview the ethos of the TWA Hotel. Open to the public by appointment, the Lower Manhattan-based marketing and events space features a replica of Eero Saarinen’s legendary sunken lounge, the Italian Solari split-flap board, and a growing collection of TWA and Mid-century memorabilia.