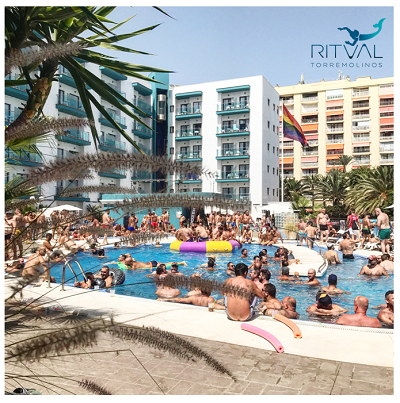 The gay-owned and operated Ritual Group of Hotels is quickly expanding its footprint in Spain, with three hotels currently in operation, and a fourth to open Spring 2019.

Hotel Ritual Torremolinos (Costa del Sol) Spain, the largest hotel in Europe aimed at the LGTBI community, is preparing for the 2019 summer season with many new features and an important expansion coinciding with its 2nd anniversary.

The hotel group, whose flagship is located in the municipality of Torremolinos, Málaga, starts its season in April. It will host several major Spanish LGBTI festivals, such as Delice Dream, Torroles Festival, Wonder Gay Festival and MadBear.

Since its launch, Ritual Group has been committed to a 360º Tourism offer. In addition to its hotel facilities (which include Sauna, Spa, Gym, Nudist Area, Parties, Spa for pets) a significant improvement to leisure and catering offer is provided thanks to the opening of Ritual Copas, Lío Torremolinos and Eden Beach Club by Ritual, where the famous Beach Parties will be held throughout the season.

Following this commitment, on April 13 Ritual will open Centuryon. This club will host the best parties with renowned national and international Djs and performances including, WE Party, Matrix, Wapo Be Yourself and Macho Party as well as their own productions.

Since opening two years ago, guests of Hotel Ritual Torremolinos have enjoyed more than 35,000 overnight stays, exceeding 95% occupancy in July and August and increasing its room capacity from 374 guests to 1,000 during the past year.

Following this success, Ritual Group has already begun its expansion. Since 2018, new hotels have been opened in El Palmar (Cádiz) and Seville. Next May, Hotel Ritual Maspalomas Gran Canaria will open its doors in front of the famous Yumbo Centrum, heart of the LGTBI community on the island.