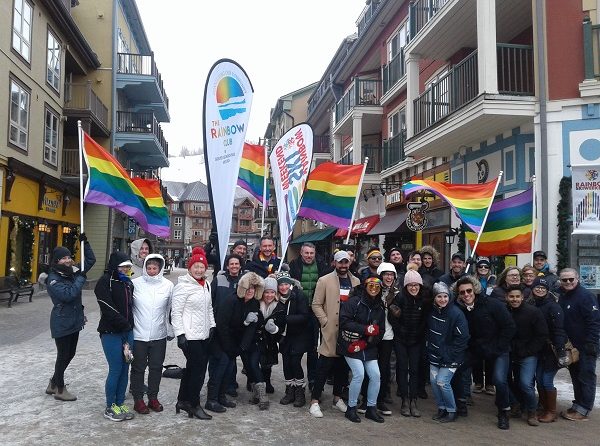 There seems to be a growing trend toward LGBT-themed events taking place over the winter months. Whistler were one of the first destinations to do so here in Canada, with their Whistler Pride and Ski Festival, now nearing three decades since its inaugural event back in 1992. Since then Jasper Pride has been going on for the past 10 years in early spring, perfect for last minute spring skiing in the Rockies. As well, this winter saw the first Elevation Gay Ski Week at Mont Tremblant in Quebec, and the second edition of Rainbow Ski Week at Blue Mountain Ski Resort near Collingwood, Ontario.

So what is it that makes these winter festivities so attractive to attendees? One aspect is the uniqueness of them, and the ability to connect with like-minded individuals who love the outdoors, and also enjoy the apres-ski activities that follow just as equally. There had been a previous LGBT ski event at Blue Mountain a few years back, under the banner of Ontario Gay Ski Weekend, which unfortunately didn’t quite take off. Rainbow Ski Weekend (RSW) was an initiative of a few business leaders from within the Blue Mountain Village Association, which eventually was spearheaded, implemented, and branded by Andrew Siegwart, President of “The Village”.

The event kicked off Friday afternoon with a short welcome address from Siegwart, followed by the raising of the Pride flag. In attendance were, Deputy Mayor Odette Bartnicki and Councillor Peter Bordignon of the Town of the Blue Mountains, and Councillor Deborah Doherty from the Town of Collingwood. Siegwart welcomed those in attendance, making mention of the Rainbow Club of South Georgian Bay that was formed after last year’s RSW. He also dedicated this year’s event to Alex Purdy, a local young homeless trans man who unfortunately took his own life recently. Later that evening there was a welcome party at Copper Blues Bar & Grill that was well attended, and they also offered a weekend brunch menu with $6.00 mimosas!

Saturday morning was rise and shine for a full day of hitting the slopes and taking in some of the many outdoor events happening throughout the Village. Proud FM was a big sponsor, and had DJ’s spinning tunes most of the day outdoors in the main centre. There were many other proud sponsors scattered throughout, as well as a few random drag queens roaming around, with The Devereaux Sisters performing on the outdoor patio at Rusty’s at Blue. While over at Twist Martini Lounge they hosted the Saturday afternoon Hat and Helmet Apres Party with Xtacy Love and friends. Later that evening, Rusty’s went from a restaurant to an all out bar and dance party, with performances and DJ, at what was billed as the “unofficial” night party. The “official” party was over at SMASH nightclub, which featured performances from several Toronto drag queens, including Katinka Kature, Farra N. Hyte, Baby Bel Bel, and Xtacy Love. 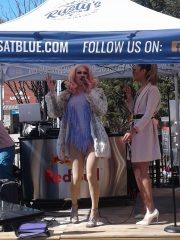 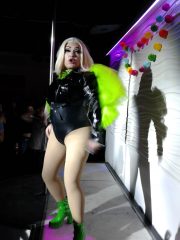 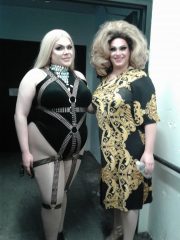 In terms of dining options, there’s no shortage within the Village, which is basically a circumference of walkways closed to traffic with shops, restaurants, and bars. Several places opted to take part in RSW, including Tholos , which offered a “Wine me, Dine me, $69.99 me” Dinner for Two special that included a salad, entree, and glass of wine each. The food is a Greek/Mediterranean fusion, and the atmosphere is fun. “This promotion was deliberately designed for two, to encourage a dinner interaction with an existing partner, or potentially a new acquaintance or friend that one may meet over the weekend”, explained owner, Bill Vomvolakis. As a member of the Blue Mountain Village Association, he was also one of the original advocates for creating a Pride event onsite.

I’d highly recommend staying at the Westin Trillium, not only for its proximity to the Village and the Mountain, but also for those comfortable “Heavenly” mattresses! Seriously, it’s like lying down on a cluster of clouds. There’s a variety of rooms to choose from, and if you’re there for a weekend its likely best to pay a bit extra and upgrade to one of their suites, with separate living area, electric fireplace, and full kitchenette with mimi-fridge, stove-top, microwave and all dishes and utensils. If cooking is not your thing, there’s always the fantastic Oliver & Bonacini Café Grill on the main lobby level. By far though, the main reason to stay there is the outdoor year-round heated swimming pool and hot tubs. Can you say relax-ation!!!

So after a day or weekend of skiing and/or partying, what more is in order than some pampering? The Iwa Spa is a must visit during your stay. This little gem can be found right in the Village, and offers everything you need after a day in the outdoors. Relax with a massage, get a rejuvenating facial, take a restorative yoga glass, or try the Ganban volcanic rock therapy, a heated rock sauna of stone beds that soothes muscles, accelerate metabolism, eliminates toxins, and increases circulation. Yes please! The Spa even offered up a Rainbow Facial Package, which included their signature facial, a glass of Prosecco, and a $10 boutique voucher. I’m in! 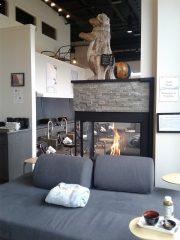 As Sunday arrives, and the weekend comes to an end, there were many in attendance who are definitely going to return, and most likely with friends who weren’t there for the start of this fabulous annual event. It’s your last chance to hit the slopes before Blue Mountain switches over to their outdoor summer attractions. For more on RSW, click here. There’s also a shuttle bus that operates daily out of Toronto for the duration of the ski season. It doesn’t offer summer service as of yet.

Check our more images at #RainbowSkiWeekend and also here, courtesy of official RSW photographer Dave West from My Collingwood.