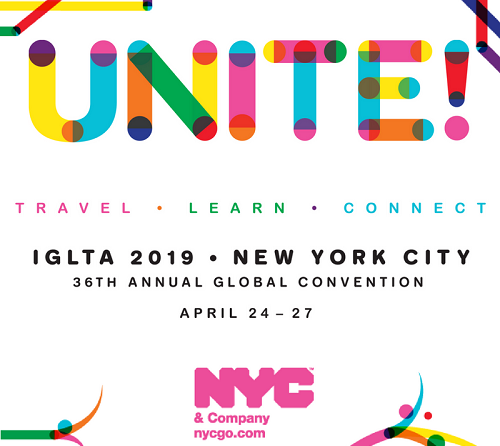 The International Gay & Lesbian Travel Association (IGLTA) has grown substantially since it was first formed back in 1983. It is now the world’s leading network of LGBTQ+ welcoming tourism businesses, that provides free travel resources and information, while continuously working to promote equality and safety within LGBTQ+ tourism worldwide. IGLTA’s members include LGBTQ+ friendly accommodations, transport, destinations, service providers, travel agents, tour operators, events, and travel media located in over 80 countries.

The organization also produces the annual IGLTA Global Convention, the world’s premier educational and networking event for LGBTQ tourism professionals. The 36th annual event was recently held at the end of last month in New York City for the first time ever, following the previous year it was held right here in Toronto. The goal is to connect LGBT owned and friendly travel and tourism suppliers, buyers, and media representatives via a scheduled appointment program, numerous educational workshops and networking receptions.

With New York City gearing up to host likely one of the largest Pride celebrations ever, as it estimates welcoming some 4 million visitors from across to globe who will be attending WorldPride events throughout the month of June, it made perfect sense for IGLTA to happen here as well this year. It’s also the 50th anniversary of the legendary Stonewall Inn riots, what many refer to as the beginning of the demand for LGBT equal rights here in North America, and around the world. There will be Stonewall events in galleries and museums during 2019, with seven weeks of Pride celebrations in five boroughs (May 10 to June 30), culminating in WorldPride (June 24 to 30). LGBTQ-themed museum exhibitions will be held at The Met Museum, the Guggenheim, New York Public Library, Leslie-Lohman Museum, New York Historical Society, and the Brooklyn Museum.

IGLTA President and CEO, John Tanzella, describes both NYC and the event itself as being, “big and bold, international, and inspiring. It was our biggest yet, hosting nearly 700 delegates from 49 countries and territories.” Community members and allies attended to discover the latest tourism trends and technology developments, address human rights issues, and learn best practices for workplace inclusion. This was accomplished through an array of daily forums and discussions that enriched the knowledge about LGBTQ+ travel, tourism, and hospitality.

NYC & Company President and CEO, Fred Dixon, joined Tanzella on stage to welcome delegates during the opening session, alongside fellow tourism professional, Roger Dow, President and CEO of the U.S. Travel Association. Both provided excellent news and advice from their respective organizations. Dixon told delegates that about 10% of New York’s visitors are LGBTQ+ and the city is the top destination in the US for the sector. According to Dixon, New York anticipates 67.1 million visitors in 2019, up from 65.1 million in 2018, which equates to about seven million will be from the LGBTQ+ community. To mark the WorldPride and Stonewall celebrations, NYC & Company has developed a new logo and motto: NYC Pride. Uncontained. It has also developed ‘Project Rainbow’, an initiative to welcome visitors during WorldPride, offering support such as gender-neutral bathroom signage.

Tanzella pointed out, “While many participants found inspiration and connections at the convention, we also remember our friends and fellow LGBTQ+ community members who continue to endure LGBTQ+ discrimination in their countries. Yes, we have made many advancements in the LGBTQ+ travel world, but we know that the struggle for safety and equality remains.”

Other speakers included, National Center for Transgender Equality Founder and Executive Director, Mara Keisling, who addressed the needs of transgender travelers and shared practical advice to help travel companies create a supportive and all-welcoming environment. Dougal Mckenzie, Google’s Head of Industry for Travel, shared how technology is driving exponential change in consumer expectations, and his presentation shed light on ways that businesses can effectively connect with, influence, and better serve travelling consumers.

There was also a Travel & Tourism Executive Leadership Panel with high-level representatives from Delta Air Lines, Hilton and the Travel Corporation, a Women in Business forum, and a Media Networking Event. There were also several round table discussions and presentations held on a variety of topics, including Entrepreneurs Small Business, Travel Agents, Evolving Language of Hospitality, LGBTQ+ Destination Development, and Top LGBTQ+ Travel Trends & Tips. As well, Thomas Roth and David Paisley, presented, LGBTQ+ Research: Insights to Help Attract LGBTQ+ Travellers, based on the research and findings of their company, Community Marketing & Insights.

This Think Tank group focused on five main topics of increasing importance in today’s world: overtourism; niche vs. “mainstream” tourism; diversity within the LGBTQ+ segment; destinations’ cultural perspectives that affect LGBTQ+ tourism; and business challenges in emerging destinations. Through the inspired communication that arises from this gathering, the goal is to move toward a future where LGBTQ+ travel is sustainable worldwide.

The IGLTA Foundation’s annual Voyage fundraising gala, helps to support the mission of IGLTA and its members through education, research and leadership development that benefits the global LGBTQ+ tourism industry. The gala event also celebrated convention scholarship recipients—from Nepal, Japan, Zimbabwe, and NYC—as they set out on their path to becoming leaders in LGBTQ+ tourism. Renowned playwright Terrence McNally and his husband, producer Tom Kirdahy, were also presented with the IGLTAF Humanitarian Award, just one day after it was announced that McNally received a 2019 Tony Award for Lifetime Achievement. The gala raises necessary funds to support the Foundation’s ongoing initiatives.

Finally, the closing sessions included the following 2019 Travel Talks: “The Future is Genderless”, presented by Billy Kolber, Founder, Hospitable Me, “Using Inbound Content Marketing to Get the Most Out of Your Advertising Budget”, presented by Meg Cale, Founder, Dopes on the Road, and “Our Role in Helping Persecuted LGBTQ+ People Globally” presented by Kimahli Powell, Executive Director, of Toronto’s Rainbow Railroad.

Overall, the IGLTA Global Convention has turned into one of the top LGBT professional travel events of the year to attend. Be sure to save the date for next year’s Global Convention to be held in Milan, Italy, May 6 to 9, 2020.