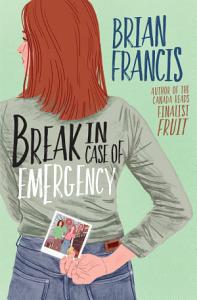 Break in Case of Emergency tells the story of 15-year-old Toby Goodman. Life has been a struggle for Toby. Her mother died by suicide five years ago and her father abandoned her mother before Toby was born.

Now a teenager living on her grandparents’ dairy farm, Toby has trouble letting people in. She keeps even her closest friend, the brash but endearing Trisha, at arms’ length, and recently ended her first relationship, with Trisha’s burnout brother, Mike. Convinced that she is destined to follow her mother’s path, Toby creates a plan to escape her pain.

But with the news that her father is coming home and finally wants to meet her, Toby must face the truth of her family’s story. Not only is her father gay, but he’s also a world-famous female impersonator—and a self-absorbed, temperamental man-child who is ill-prepared to be a real parent.

When Toby’s careful plans go awry, she is forced to rebuild the life she thought she knew from the ground up. While she may not follow an expected path, through the support of a quirky but lovable circle of friends and family, Toby may finally put together the many different pieces that make up her past, her present, and her future.

What a wonderful weekend read! I started this on Friday, and finished it on Sunday. I couldn’t stop reading, wanting to know what Toby was up to next. It’s such a compelling story of a troubled teen, dealing with the loss of both parents at an early age, one through suicide, and the other through their absence.

Suicide and depression are very deep topics to explore in an young adult novel, yet Francis does it in such a way that’s both compassionate, and sometimes comedic. I read with tears at some points, and had a couple LOL moments as well. The sign of a great writer is when they can evoke emotions in a reader.

The detailed descriptions of everything, from the small town rural farm and grandparent dinners, to the moment of finding one’s mother dead from an overdose, are so vivid that it makes one feel they are there, present in the moment. The character depictions of the other individuals in the novel are also detailed in such intimacy, making it easy to visualize, empathize, and sympathize with each and everyone of them. The use of the same anecdotes and references throughout the novel, help bring light to the multi-layered meanings behind them. In the end, we are all cheering Toby on, to keep going, keep fighting, and not making the same closed choice that her mother did.

Brian Francis is the author of three novels – Fruit, Natural Order, and the forthcoming, Break in Case of Emergency. He also writes a monthly advice column, “Ask the Agony Editor,” for Quill & Quire magazine, a retro recipe column called “The Kitch” for Taddle Creek magazine and is a regular contributor to CBC Radio’s The Next Chapter.  In September 2019, his latest novel, Break in Case of Emergency, will be published by HarperCollins Canada. See below for an excerpt.

As well, his recent performance piece, titled Box 4901, debuted at the 2018 Summerworks Festival, and will be re-staged as part of the upcoming 2019/20 programming at Buddies in Bad Times Theatre.

In 1992, Brian Francis placed a personals ad in the newspaper. In total, he received 25 responses but there were 13 letters he never responded to. Now, at a much different stage in life, Brian has written replies to those letters. Featuring a cast of 13 queer actors, Box 4901 is a hilarious, strange, sweet, and awkward look back at how gay men used to find one another. Tickets

Excerpt from Break in Case of Emergency

After dinner, which isn’t that horrible, I decide to go to the common seating area. I need a change of scenery. They have a TV on the wall, usually showing game shows or dramas about hospitals. Which is pretty ironic, considering everything. The TV is behind a thick sheet of plastic. I guess so we’re not tempted to stick our head through the TV. Or throw it at someone.

There’s only one other person watching television, an older man whose name I think is Charles. I try not to talk to people. It complicates things.

Wheel of Fortune is on.

“Do you mind if I change the channel?” I ask Charles. He doesn’t respond. I don’t think he’s even watching the TV. So I grab the remote and flip through, trying to find something worth watching. I need to take my mind off my mind, if that makes sense. I can’t tell if being in the hospital is making things worse or better. I’m here for two more days. Then I’m going back home. I need to report back to the psychiatrist. They need to know that I won’t harm myself again. I’ll tell them what they want to hear. That’s what Meg told me.

“Play them at their game,” she said. “That’s the only way to survive. It’s the only way any of us survive, if it’s in here or out there.” Her finger jabbed toward the window. “Remember that.”

I finally settle on a National Geographic show about lizards. I look over at Charles to see if he approves, but he doesn’t seem to register anything. It’s like he’s watching a show on the other side of the television.

Just as a frilled-neck lizard comes racing across the screen, I hear a voice behind me.

That voice. I know it. I slowly turn around and see a woman with thick blond hair talking to one of the nurses at the station. She’s wearing a blue dress so tight it looks like the buttons might pop at any second. Her lips are the colour of cinnamon hearts. Her eyelashes look like tarantula legs.

Oh my God, I think, as I turn around and slide down the sofa.

I don’t know what to do. If I try to slither off the couch and crawl back to my room, I’m going to be spotted. But if I stay here, he’ll eventually see me, too. There are only a couple of metres and two pillars separating us. My eyes dart from one side of the room to the other as I try to figure out an escape plan.

Why is he still here? He was supposed to go back to Europe.

“Personally, I think the glamour of nursing has fallen by the wayside,” I hear him say. “It used to be a respectable position. Now you’re all rolling into work wearing burlap sacks.”

“Who are you here to see again?” He’s speaking with Nancy, one of my favourite nurses. She’s younger than the others and has perfect white teeth.

“Are you her grandmother?”

“You bite your tongue before I snip it off. I am her father.”

There’s a moment of silence. I look over at Charles just as he turns his head toward the voices.

“That’s right. Why do you look so shocked? Surely I can’t be the only father who’s shown up in full face before. Especially in a place like this. It goes with the territory, if you don’t mind me saying so.”

“Arthur Turner. But my friends call me Anne T. Christ.”

“I hate to think what your enemies call you,” Nancy says. “Is Toby expecting you?”

“Yes. For the past fifteen years.”

I slowly twist around. My eyes hover over the edge of the sofa. Nancy walks toward my room. Arthur is still standing next to the station. I can’t believe he showed up like this. What’s his goal — to humiliate me even more? Why is he even still here, in Tilden? His head turns this way and that, like he’s taking in every last detail. I see that his nails are still blood red.

“Do you have a quarter?”

It’s Meg. I didn’t see her come up behind him. My stomach churns. Now everyone is going to know.

“What for?” he asks, one eyebrow shooting up his forehead. “Is there a pinball machine around here I don’t know about?”

“Where on earth are you buying coffee for a quarter in this day and age? It must not be very good.”

“You poor dear,” he says. “Nothing worth eating or drinking ever came from a machine. My God, look at those bags under your eyes. Have you ever tried cucumber slices? Or cold tea bags?”

Meg squints at him. “There’s something funny about you. Are you a man?”

“Then, no. I’m only a man on Tuesdays and Sundays.”

“You a new patient?”

“No, but I’m open to auditioning.”

I turn to see Nancy standing in front of me. “Do you know this person?” she whispers. “Is he really your father?”

I don’t know what to say. He’s factually my father, but emotionally, he’s nothing but a stranger. I glance back over at him, but he doesn’t seem to hear our conversation. He’s looking at Meg like she’s some kind of abstract painting.

I watch as she walks back to him. “I’m sorry, but Toby isn’t available.”

“That’s not an option. You’ll have to leave now.”

He looks from Nancy to Meg and seems to deflate, like he’s a balloon with a slow leak.

“Well, then,” he says, raising his chin. “I hope she’s doing well. And tell her… Tell her I hope she gets better.”

“I’ve been to this hospital before, many years ago,” he says. “Visiting an old friend. And I can’t say I’m glad to be back. You really do need to redecorate.”

“About that quarter…,” Meg says.

“I couldn’t help you out anyway, darling,” he says. “Turns out I don’t have anything of value to anyone.”

He turns, a swish of blond hair, and walks out, the click of his heels bouncing off the walls.