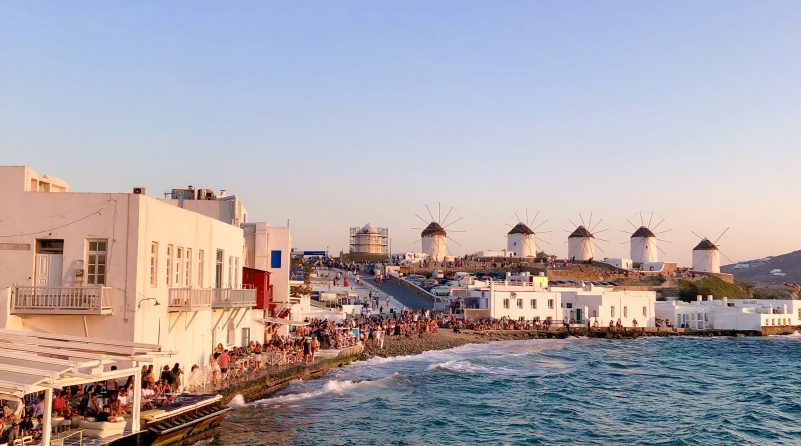 People often ask me where I recommend that they should vacation in the world, and for years I have been saying to place Machu Picchu in Peru at the top of the list. Reason being that every year I go back to Machu Picchu, there is less of Machu Picchu that is accessible to tourists.  So, it is a place you want to visit now, so you can have the best experience.

Having just returned from Mykonos, I am placing it second on the list after Machu Picchu, but for totally different reasons.  I think for a lot of gay people, when they come to Mykonos, they are expecting it to be mostly gay. It isn’t. Don’t get me wrong, there is still a huge amount of gay tourists coming to Mykonos, and the island is incredibly gay friendly, but as you walk around, it feels maybe 10% gay.

Some of my friends who live there, or own businesses there have told me that Mykonos is trending less and less gay every year.  Another trend is that the island is becoming more and more expensive.  You see this in the pricing of accommodations, but especially in cuisine and nightlife. When you’re spending €15 for a vodka drink, a simple night out can get very expensive. Expensive, but still totally worth it, I must say.  Still, the time to come to Mykonos is now, before the prices get much bigger, and the gay following becomes much smaller.

As an Island geared especially towards tourists, you would think that this influx of people would make shop and restaurant owners a little beat-down and less friendly. However, I was really blown away with this visit with just how nice people were. I found this to be true with both people working on the island, as well as fellow tourists. It’s as if people arrive in Mykonos just ready to be nice to each other. Service is excellent, food is really high-quality, and the shopping on the island is a really pleasant surprise.

The tourist season is about to end in Mykonos—September, although the fist two weeks in September may be the best time to go.   It will gear up again next June, so you may want to save the tips in this article for if you come next year.

Probably the toughest thing about Mykonos, is the fact that things are pretty spread out. While I suggest staying in charming, beautiful Mykonos town, you’re going to need some transport to get  to its famed beaches.  Some people rent scooters or four wheelers, but many people find this to be dangerous, And I have heard some horror stories about people crashing on scooters.  You can also rent a car for around €80 a day. The problem with all of these options, is that when you’re at the fun beach clubs, you want to be able to drink and have fun, and not drink and drive. So, there are car services, but they are not always very reliable.

Still, I think the best thing is to get a car service, and just be prepared to have a bit of a wait.

During the day, most gay people will go to Elia beach and then by 4 PM to the beach club, Jackie O, located on Super Paradise beach, which attracts a huge gay crowd, has a fantastic pool, and offers a drag show.

Especially if staying in Mykonos town, the thing to do in the evenings is to go to the Elysium Hotel, a gay hotel at the top of Mykonos town, for sunset. Then, have as late dinner as possible, and then to Porta, and Cinderella for early drinks, and then the gay bar/clubs Jackie O and Babylon, at about 1 AM. All of these are very close, so you can check out all four and see which you like the best.  In addition to being fun places with friendly people, the bars are all really beautiful. In fact, I think Jackie O in town (there is the Jackie O Beach club as well as the gay club located in Mykonos town) is the most beautiful Gay bar I’ve ever seen. The lighting at night is chic and stylish, The architecture is perfectly Myconian white and beautiful, and there are views of the water and Mykonos Town.

Where to stay:  I love the Rochari hotel, and it attracts a very gay crowd in season.  The rooms are beautiful and include a complimentary buffet breakfast.  There is also a restaurant featuring a terrace with sea views, plus an outdoor pool, a bar and a lounge.

There are also beautiful hotels around the island, not in Mykonos town, such as the stunning Myconian Ambassador Hotel, a Relais & Châteaux property not far from Elia Beach and Super Paradise.  One of the benefits of staying in a property like this is that you will have a reliable car service, for a price.

Where to eat: The three fine dining restaurants that I recommend are Kalita, and M’ Eating for more of a gourmet culinary experience, and Sea Satin for fresh fish and the best views.  The best Greek salad on the island is hands down at the Belvedere Hotel.

Some additional facts about the island:

– It became more of daytime fun place because of the beach clubs, Scorpios, Nammos, and Alemagu, which are largely straight, and Jackie O which is gay.  However, once on Mykonos, you will notice that the straight venues will still have many gay people, and the gay venues will still have many straight people. In addition, they all have weekly parties, so follow them on social media to get the latest tea.

– Mykonos is not just a party place. There is culture, great cuisine, and more.

– It can’t be compared with Ibiza. People do, and it’s a mistake. Mykonos is less party-focused.

Bryan Herb is co-owner of Zoom Vacations®, a US company that creates stylish international private events and gay group vacations to the world’s hottest destinations. Learn more about them at www.zoomvacations.com or call 773.772.9666.