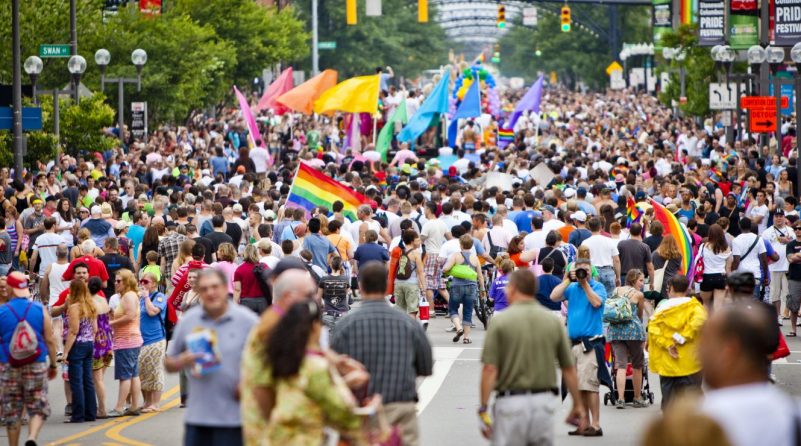 This was my fourth visit to Columbus, Ohio and every time I visit, I discover something new. What a lot of people don’t realize about this thriving mid-west city is that its LGBTQ community is one of the largest in the United States and growing every day.

Within minutes of arriving, I got a chance to visit Stonewall Columbus, their LGBTQ community center, located in the Short North neighborhood. The building, which recently went through a major renovation, offers a number of health and wellness services in addition to hosting numerous events throughout the year. Stonewall also houses an art gallery dedicated to local LGBTQ artists.

Just a short stroll down High Street and you’ll run in to Union and Axis, two of the city’s many gay nightlife venues. On previous visits, there used to be a few more gay bars located on High Street, but they have since closed and others have sprouted up throughout the city.

Art enthusiasts will love the Columbus Museum of Art’s upcoming exhibition Art After Stonewall which opens in March 2020. The exhibition, which previously visited Miami and New York was actually curated by the Columbus Museum of Art. The entire process of curating an exhibition of this size, which includes about 250 works of art by LGBTQ artists, took around 7 years to complete. The collection includes a combination of well-known artists as well as some lesser known names.

After exploring the museum, head to North Market for lunch. Dozens of food vendors are located under one roof which features a culinary explosion for the senses including foods from Somalia, Greece, India among others. Also located in North Market is Jeni’s Ice Cream, a homegrown shop which now has locations in other cities around the country. Try the Brown Butter Almond Brittle, it’s to die for!

A few doors down is Le Meridien Columbus, The Joseph. Developed by The Pizzuti Companies, the boutique hotel boasts a vast art collection of works acquired by Ron Pizzuti, one of the largest collectors of fine art in the world. Pizzuti’s collection is so extensive that he had to open a building to house it all. Guests of The Joseph get to explore The Pizzuti Collection free of charge. The property is also located in the Short North neighborhood, so it’s a great place to stay if you want to partake in LGBTQ nightlife.

For dinner, check out a gay-owned restaurant in German Village called Barcelona. The tapas-style restaurant offers a large indoor dining room as well as a lovely patio that makes you feel as if you are in Spain. I tried a variety of tapas in addition to a delicious charcuterie board which nicely completed the white sangria. Barcelona also offers four types of paella to choose from including a vegetarian option.

A few blocks away from the restaurant are some of the city’s neighborhood gay bars including Club Diversity, Boscoe’s and Tremont Lounge. Club Diversity is located in a converted house and really does welcome the most diverse crowd I have seen at a gay bar in recent memory. The establishment makes everyone feel comfortable regardless of sexual orientation or gender identity.

Boscoe’s is also quite unique. On the evening I visited, the bar had a drag show and male strippers alternating performances throughout the night. The concept was actually a great idea, however I felt like the crowd was more excited about the queens. Other Columbus gay bars worth noting include Awol, Southbend Tavern, and Cavan Irish Pub. The city also boasts many retail establishments dedicated to the LGBTQ community.

Columbus Pride is one of the largest pride festivals in the country, drawing over 800,000 revelers every year and according to local sources, their pride parade is larger than Chicago’s. Not a bad accomplishment for a city much smaller than Chi-Town. Plan on attending the next festival which is scheduled for June 19-21, 2020.

History buffs will love the newly opened National Veterans Memorial and Museum. It is the only museum in the country that honors all Veterans – from all branches of service, and from all eras of our nation’s history of military service from the Revolutionary War to present. I was moved to tears watching videos of veterans telling their stories about the trials of war and the pressure it puts on their families. It really is an emotional experience that I wasn’t ready for to be honest. I have been to many museums of this nature, but for some reason, this one struck a chord.

End your day with a meal at The Guild House, a restaurant developed by local celebrity chef and restauranteur Cameron Mitchell. When you enter the restaurant, you are greeted by warm notes of color with a modern twist. I almost felt as if I was dining at a culinary version of West Elm. For starters try the Tuna Ribbons and Steak Tartare. Both presentations are elegant and artful, just like the restaurant itself. My favorite entrée on the menu was the Sea Bass served in a lobster broth accompanied by carrots, leeks, radish and chili oil. Finish off your meal with the Carrot Cake and savour Chef Mitchell’s twist on the traditional favorite.

An interesting fact about the city is that it is home to the 3rd largest number of fashion designers in the United States, behind New York and Los Angeles, due to the fact that L Brands is headquartered in Columbus. Local businessman Les Wexner founded the company in 1963 and has grown the fashion empire to include brands like Victoria’s Secret, Express, The Limited, Abercrombie & Fitch and Bath & Body Works. Although some of the brands have been spun off or sold, they have all called Columbus home. And where there are fashion designers, there are also models. Lot and lots of models. The eye candy is one of the city’s strong points.

If you are looking for an easy, affordable and fun city to visit, check out Columbus. You may be surprised at what this city has to offer, and you may keep coming back to experience its warmth and hospitality.