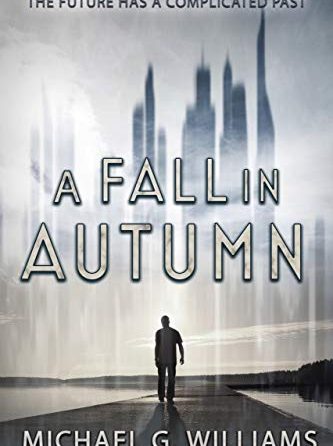 Michael G. Williams writes wry horror, urban fantasy, and science fiction: stories of monsters, bizarre futures, macabre humor, and subverted expectations. Michael also writes short stories and contributes to tabletop RPG development. He strives to present the humor and humanity at the heart of horror and speculation. His latest novel is, A Fall in Autumn.

Soaring miles over the Earth, Autumn, the sole surviving flying city, is filled to the brim with the manifold forms of humankind: from Human Plus “floor models” to the oppressed and disfranchised underclasses doing their dirty work and every imaginable variation between.

Valerius Bakhoum is a washed-up private eye and street hustler scraping by in Autumn. Late on his rent, fetishized and reviled for his imperfect genetics, stuck in the quicksand of his own heritage, Valerius is trying desperately to wrap up his too-short life when a mythical relic of humanity’s fog-shrouded past walks in and hires him to do one last job. What starts out as Valerius just taking a stranger’s money quickly turns into the biggest and most dangerous mystery he’s ever tried to crack – and Valerius is running out of time to solve it.

Now Autumn’s abandoned history – and the monsters and heroes that adorn it – are emerging from the shadows to threaten the few remaining things Valerius holds dear. Can the burned-out detective navigate the labyrinth of lies and maze of blind faith around him to

Michael is also an avid podcaster, activist, reader, runner, and gaymer, and is a brother in St. Anthony Hall and Mu Beta Psi. He lives in Durham, NC, with his husband, two cats, two dogs, and more and better friends than he probably deserves.save the City of Autumn from its greatest myth and deadliest threat?