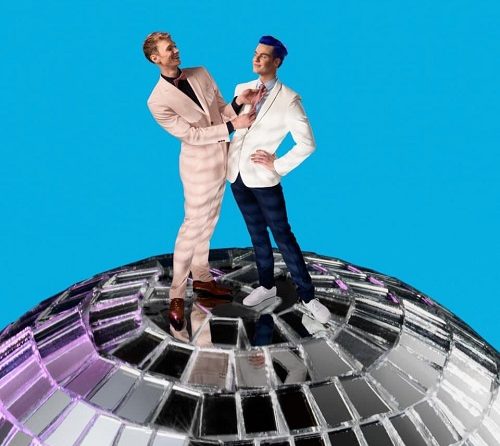 For anyone who’s going to be in Calgary this month, you might want to check out this new theatre production. Many people remember the 2002 controversy around Oshawa high school student Marc Hall, when he wanted to bring his boyfriend to the school prom, but was denied. He eventually won a court decision and was allowed to attend, amid a frenzy of media hype. A television film based around his story was released in 2004 under the title,  Prom Queen: The Marc Hall Story. Now his story is being told onstage as a new Theatre Calgary production of The Louder We Get.

This dazzling musical follows the compelling and inspirational true story of Marc Hall as he navigates the Catholic school system to fight for his right to take his boyfriend to prom. With colourful pop-inspired songs and heart-warming unity, you won’t want to miss this electric love story at Theatre Calgary. Seventeen years later, the meaning and message of Marc’s story is just as important today, as it motivates and inspires people to embrace equality and stand up for who they are. It is a story about speaking up for what you believe, standing up for someone you care about, and making change.

The show features Evan Kinnane in the role of Marc Hall. He’s also appeared in, Moulin Rouge! The Musical, Ragtime, Gypsy, Singin’ in the Rain, and A Chorus Line. The Louder We Get also features Canada’s Lee MacDougall (Come From Away, Broadway) and Thom Allison (Priscilla Queen of the Desert, Broadway).

Marc Hall recalls his first meeting with Kinnane. “Shorty after Evan was cast, I received a surprise phone call from him. As you can imagine, it’s a bit surreal to speak with someone who is going to play you in a musical, “ says Hall. “I’m excited to share my story with him, I think he will be amazing at bringing it all to life, and sharing the message and meaning of the show.”

The play is based on the book by Alberta-born playwright Kent Staines, and lyrics and music by former Calgarians Akiva Romer-Segal and Colleen Dauncey.

Tickets are on sale now.

$35 and Under, PWYC, and other promotional offers here.

Founded on July 1, 1968 Theatre Calgary is Calgary’s first and largest professional theatrical company. Our mission is to stimulate, provoke, and delight through ambitious programming created to ignite local, national, and international engagement. We are a member of the Professional Association of Canadian Theatres, and operate within the jurisdiction of the Canadian Theatre Agreement. For more information, visit us at theatrecalgary.com and follow us on Instagram, Twitter and Facebook.