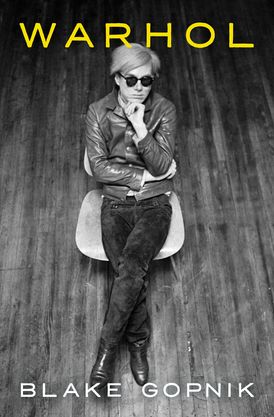 Looking for something new to read, while self-isolating? Canadian Blake Gopnik’s Warhol  is the definitive biography of the iconic artist. Not only has it been a long time since Warhol’s been examined in this way, but no biography has approached the level of authoritativeness and nuance of this perennially fascinating figure. Blake Gopnik had unprecedented access to Warhol’s enormous and eccentric archives of material and objects, and it shows.

Warhol’s life and times were reconstructed by consulting more than 100,000 historical records, including more than 1,500 articles from vintage magazines and newspapers, the artist’s own archives and libraries stretching from Austin, Texas to Portland, Oregon.

On top of that, Gopnik secured interviews with Warhol’s first boyfriend and with another four men who slept with the artist, proving that rumors of his asexuality have been overblown. Diving deeper into Warhol’s early life, Gopnik highlights documentation of the police squad that was created to eradicate gay life and culture in postwar Pittsburgh, just when Warhol was first finding himself as a gay man. When these cops weren’t shooting their victims they were extorting hush- money from them. If Warhol was never quite at ease with his sexuality, it’s easy to see why.

While his sexuality is frequently suppressed or debated, Warhol was a gay man who had several partners throughout his life. Warhol’s boyfriends, including Edward Wallowitch, John Giorno, and Jed Johnson, were also his colleagues and collaborators, helping to shape and define his career as an artist. This tour traces Warhol’s romantic relationships and queer identity against the backdrop of the historical gay rights movement in the United States.

Take a look at the exhaustive biography of a fascinating and paradoxical figure, one of the most influential artists of his—or any—age. I’ve attached a brief overview of highlights from the book (though the book goes much deeper and includes Warhol’s fixation with a Hollywood film career, his work managing The Velvet Underground, friendships with socialite Edie Sedgwick and actress Brigid Berlin, and the assassination attempt by Valerie Solanas) to give you a taste of what to expect from this compelling and comprehensive dive into Warhol’s world.

To this day, mention the name “Andy Warhol” to almost anyone and you’ll hear about his famous images of soup cans and Marilyn Monroe. But though Pop Art became synonymous with Warhol’s name and dominated the public’s image of him, his life and work are infinitely more complex and multi-faceted than that.

In Warhol, esteemed art critic Blake Gopnik takes on Andy Warhol in all his depth and dimensions. “The meanings of his art depend on the way he lived and who he was,” as Gopnik writes. “That’s why the details of his biography matter more than for almost any cultural figure,” from his working-class Pittsburgh upbringing as the child of immigrants to his early career in commercial art to his total immersion in the “performance” of being an artist, accompanied by global fame and stardom—and his attempted assassination.

The extent and range of Warhol’s success, and his deliberate attempts to thwart his biographers, means that it hasn’t been easy to put together an accurate or complete image of him. But in this biography, unprecedented in its scope and detail as well as in its access to Warhol’s archives, Gopnik brings to life a figure who continues to fascinate because of his contradictions—he was known as sweet and caring to his loved ones but also a coldhearted manipulator; a deep-thinking avant-gardist but also a true lover of schlock and kitsch; a faithful churchgoer but also an eager sinner, skeptic, and cynic.

Wide-ranging and immersive, Warhol gives us the most robust and intricate picture to date of a man and an artist who consistently defied easy categorization and whose life and work continue to profoundly affect our culture and society today.

Blake Gopnik’s Warhol is available from Harper Collins as of April 21, 2020