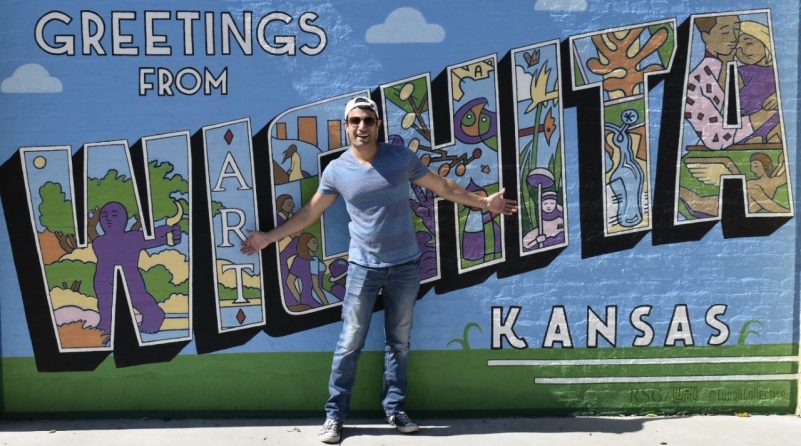 When I found out I had the opportunity to visit Wichita, I was really excited. I had never been to Kansas before (aside from Kansas City) and was eager to see what “Cowtown” had to offer. First, a little history lesson. The city actually began as a trading post on the Chisholm Trail in the 1860s and became a key destination for cattle drives traveling north from Texas to access railroads, earning it the nickname “Cowtown.” In the 1920s and 1930s, businessmen and aeronautical engineers established a number of successful aircraft manufacturing companies which helped transform the region into a hub for aircraft production. Wichita got a new nickname, “The Air Capital of the World.” Manufacturers including Airbus, Beechcraft, Cessna, Learjet, and Spirit AeroSystems currently operate large facilities there.

In addition to planes, Wichita is also known for its weather. I know this may sound strange, but I was really hoping to witness some intense storms. Kansas lies in tornado alley, so I was in full storm-chaser mode. However, all I experienced was a small thunderstorm, but it was cool non the less.

I digress. Wichita is home to Tanganyika Wildlife Park. Yes, it took me the entire trip to remember how to pronounce the park’s name, but I got it eventually. Tanganyika offers more hands-on opportunities and up-close animal experiences than traditional zoos. My first stop was the penguin encounter, an indoor/outdoor exhibit filled with cuteness. I learned firsthand that penguins like to play with shoelaces and anything colorful. And speaking of colors, they also enjoy painting. I left with a beautiful work of art painted by one of my new friends.

With my masterpiece in hand, I headed to the lemur feeding area where I had a chance to feed the adorable Primates. Although Tanganyika doesn’t let you pet the lemurs, the experience was still really fun. Tanganyika Wildlife Park opened in 2008 with 15 exhibits and three interactive areas. Today, they boast over 40 exhibits featuring 10 interactive stations, over 400 animals and 37 successful breeding programs. Zoos sometimes get a bad reputation, but I was really impressed by high level of animal conservation efforts and care exhibited by the staff.

After freshening up at The Courtyard Wichita at Old Town, it was time to begin the Wichita Pride festivities. The Opening Night Drag Show drew nearly 400 guests to WAVE, a hotspot a few blocks from my hotel. For a small city pride festival, Wichita sure organizes a jam-packed weekend of events for all ages. The following evening, families were encouraged to attend the Saturday Night Pride Party. Although it was geared to teens, it was great to see a Pride organization support all members of our community, regardless of age, sex or gender orientation.

Sunday afternoon kicked off with a Community Rally on the steps of the historic Sedgwick County Courthouse. LGBTQ community leaders and local politicians gathered in front of a crowd of a few hundred people all in support of LGBTQ equality. I was really impressed at the size of the crowd. Rallies can be hit or miss depending on the city, but the people of Wichita really came out in full support. After the rally, the Pride Parade began with companies including Cargill, Cox and T-Mobile taking part in the march. It was the first time I walked in a pride parade as I am usually working a booth at the festival itself, so this was a very memorable moment for me. As I strolled along the nearly mile-long route, I noticed the endless number of smiles from not only the participants but also the onlookers showing their support for us as we waved our rainbow flags.

The parade ended at Mid-America All-Indian Center and the main festival began. Hosted by Dick Von Dyke, the festival contained about a dozen drag queens and kings including Cynthia Doll and Ms. Amanda Love. I quickly noticed how diverse the crowd was. Every letter of the LGBTQ rainbow was represented, more so here than in prides I’ve attended in larger cities. I guess when you live in a small city, you need to stick together. The Mid-America All-Indian Center sits on sacred ground to the Native American people and is highlighted by the Keeper of the Plains, a 44-foot steel iconic sculpture standing at the point where the Big and Little Arkansas rivers merge. It was the perfect setting!

The celebration continued at Boomerang and XY Bar, two of Wichita’s gay nightlife venues. Boomerang prides itself in welcoming all members of our community including those in the bear and leather communities, while XY Bar is the place to go to dance with Wichita’s younger gay folk. A third bar called J’s Lounge, which labels itself an upscale dive bar, was also hosting some festivities, but I didn’t have a chance to visit. My partying days are behind me and visiting two bars in one night was almost too much for me to handle. The Courtyard across the street from XY Bar, so it was the perfect place to end my evening.

I spent the next day walking around the city. It was a beautiful Sunday morning and felt it would be a great time for a leisurely stroll. Wichita is home to a lot of public art displays and murals as well as the Museum of World Treasures, which boasts one of the most complete skeletons of a T-Rex in the country. You know I had to check that out!

During my stay, a local theatre group housed at Roxy’s Downtown was putting on a production of Tick, Tick…Boom!, a musical about turning 30 and not yet realizing your dreams. The message really hit home as I am one year from 40 and still feel like I have so much to accomplish. In 2020, Roxy’s will stage their rendition of The Golden Girls. I may have to visit again to see that production.

Although Roxy’s serves food, I decided to head to Rain Café & Lounge after the performance, an LGBT-owned restaurant/bar located a block from the theater, in the heart of downtown Wichita. The decor was really nice, and the staff was quite friendly. I was told that Rain is the place to have brunch on Sunday, so I’ll have to add that to my itinerary next time I visit.

The next morning, I woke up early and headed to Botanica, The Wichita Gardens. Botanica consists of 30 additional themed gardens and exhibits. The year-round attraction now comprises of over 18 acres and features over 4,000 species of plants. As I was walking around the park, the staff was preparing for their annual holiday light spectacle. It was barely October, yet it takes weeks to prepare and is one of the busiest times of the year.

Even though I didn’t get to witness any tornadoes, I still enjoyed Wichita. I really didn’t know what to expect before visiting, especially when it came to the LGBTQ community, but I left pleasantly surprised at how large and proud the community is. If you ever find yourself wanting to experience a small city with lots of charm, I’d add Wichita to your list.