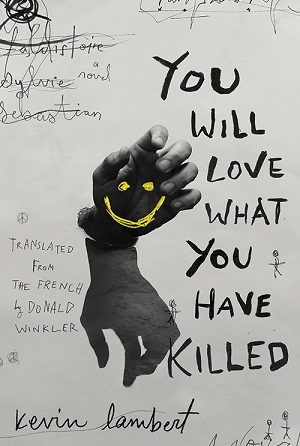 You Will Love What You Have Killed by Kevin Lambert is his debut novel, which has already won the Quebec booksellers’ prize. The children of Chicoutimi, Quebec, meet violent ends, then return to resume their lives. While the adults around them are absorbed in their own designs, the underage victims of infanticide, rape, and accidental violence go to school, discover their sexualities, keep tabs on adult sins, and above all plot their apocalyptic revenge. Sounds like a spooktacular read for Halloween!

It’s a Gothic, surreal, queer coming-of-age story about life in suburbia, and it’s probably almost redundant to say that it’s a revenge fantasy, in which the ghosts of mistreated children come back to life and, once they’ve gathered sufficient force, form an army and blow the entire town to bits. The end.

This novel reflects on the complex connection queer people have to their place of origin and their childhoods. Growing up in a very homophobic environment and having hidden his sexuality until age 20, Lambert accumulated a great deal of anger toward the town he grew up in. Through this novel, he attempts to understand the mentality of his hometown and then he rejects that mentality in a great gesture of anger, hatred, and violence.

Lambert even named a character after himself, one who kills one of the children. He said, “This character, who is my absolute opposite, is a bit of a marker of my (oblique) relationship to autobiography: my experiences, my feelings and I are indeed in the book, but disguised, made up, difficult to recognize. Everywhere and nowhere at the same time.”

It’s not a book for everyone, but it is very definitely for some readers, not just genre enthusiasts, but those who appreciate literary stylists. Pick up your copy from Biblioasis.

Born in 1992, Kevin Lambert grew up in Chicoutimi, Quebec. He earned a Master’s degree in creative writing at the Université de Montréal. He’s currently living in Montreal, and working on his next book, Querelle.