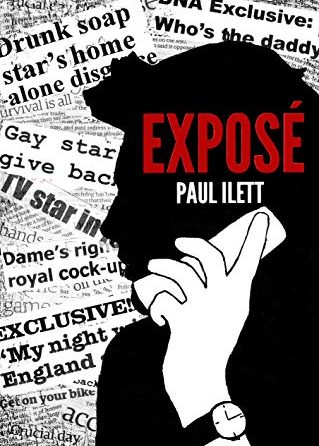 As recent Government enquiries have proven, the UK’s tabloids have a rocky relationship with decency, decorum and even the basic truth. But while they’re often seen as a powerhouse that can’t be touched, the new novel, Exposé, by Paul Ilett ensures the journalists behind the stories finally get justice served to them.

Staff at a ruthless tabloid get a taste of their own medicine in this new satirical comedy. The Daily Ear is the country’s biggest selling paper, a powerful and influential news organisation with an unparalleled reputation for exposing the private secrets of those living in the public eye. Feared by celebrities and politicians alike, the Daily Ear is a force to be reckoned with. But that all changes when handsome, wealthy actor Adam Jaymes turns the tables on the tabloid and starts exposing the shameful secrets of the newspaper’s top team. The public is captivated by Jaymes’ campaign and the newspaper is soon at the heart of an international scandal. As friends and allies desert them in droves, it becomes obvious that the Daily Ear may finally have met its match.

Actor Adam Jaymes seems to have it all; good looks, a hugely successful career and marriage to one of the world’s richest men. But too often the details of his private life have found their way into the pages of The Daily Ear, the world’s most salacious tabloid, and Adam wants a taste of revenge.

Gossip columnist Valerie Pierce, ‘kiss and tell king’ Colin Merroney, and paparazzi are all hiding secrets of their own, and Adam has found them out. Now the tables are turned as Adam begins to publicly expose the private lives and secret shames of the tabloid’s top team. And nothing will be the same again.

“Adam is the societal hero we all wish for; the maverick who fearlessly steps up to commit an act of revenge on behalf of all,” explains Ilett. “As a former journalist, I was all too often privy to the shady inner-workings of newspapers, and especially the stop-at-nothing attempts to get a good story that would sell copies at the expensive of everyone else. This novel blows the lid off it all.”

It’s a new brand of gay fiction, and even more compelling since Ilett is himself a former journalist. This volatile cocktail is unlike any other novel on the shelves, and apparently a sequel is currently in development.

‘Exposé’ is available from Amazon

Paul Ilett spent more than a decade working as a reporter across a range of different media organisations including newspapers, radio stations and TV news. He continues to write as a freelance journalist with articles published in the likes of The Guardian, Attitude, Press Gazette and Readers’ Digest. In the late nineties he worked for the BBC’s news website and became one of the corporation’s first online journalists. It was there that his interest in online media began, particularly how the rapid growth of social media (such as Twitter and Facebook) eroded the power of the traditional press. A keen advocate of LGBT rights, Paul’s writing also focuses on homophobia within the newspaper industry. Despite parodying many in the media, Paul’s first novel EXPOSE received fantastic reviews in national publications – including a four-star rating from The Sun. Paul is 48 and lives in England. You can follow him on twitter @Paul_Ilett