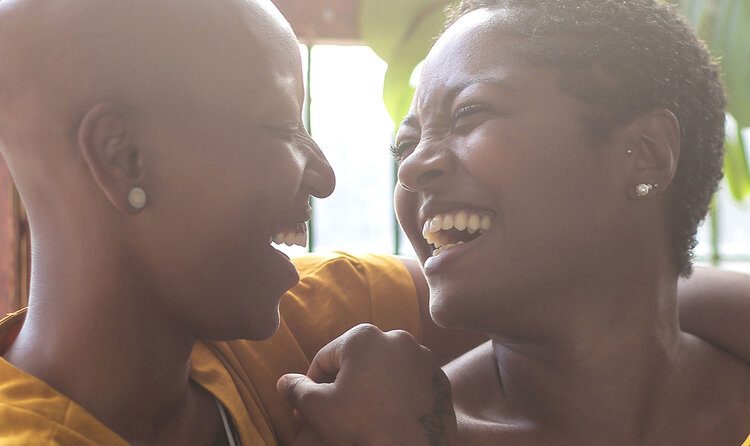 The Center for Black Equity (CBE) and Community Marketing & Insights (CMI) have released the results of the Black LGBTQ Community Survey. Key findings from the survey can be found below, and to receive a free copy of the full report, send your request to: research@cmi.info

To attend a free webinar discussion (February 23 at 1:30 Eastern/10:30 Pacific) about the study and its application in business and organizations, register here.

Cannot Be Their Full LGBTQ Selves

Support by Their Local Cities and Towns

Being Out in Their Family

Black LGBTQ community survey participants value education: 48% of participants have a bachelor’s degree or greater. Importantly, 84% of participants pursued education after high school, either through graduating from college, currently in school, obtaining an associate’s degree, starting college but not graduating, or obtaining vocational training. Cisgender lesbians had the highest education levels, especially earning a master’s degree. Transgender and non-binary participants were least likely to have a four-year degree. However, there was a clear trend for transgender and non-binary participants to have started post-high-school education, but not yet receiving a four-year degree. This may indicate that more fiscal, emotional, and practical support is needed to ensure educational goal completion.

While most of the study participants are single, only 40% indicated living alone. Most participants live with their partners, their children, parents, other family members, friends, or roommates. Of note—because older people often have more significant social isolation concerns—was that nearly half (49%) of the Baby Boomers lived alone.

High Levels of Discrimination for Transgender and Non-Binary Community Members

Black transgender and non-binary participants report the highest levels of racial, gender, and gender identity discrimination across all related questions in the survey.

Participants were asked to prioritize their concerns when considering voting for one political candidate over another. Overall, discrimination and police violence were the most pressing voter issues, followed by healthcare (including COVID-19). Economic concerns, local crime, foreign policy, and cybersecurity were the least pressing issues.

75% of all Black LGBTQ study participants were involved in some type of Black Lives Matter protest or engagement. In general, younger community members were more engaged in activities, especially marches and protests.

A large number of Black LGBTQ adults in the United States are parents and grandparents: 28% of all participants indicated being a parent of a child of any age. The concentration of LGBTQ parents of children under age 18 is greater among lesbian and bi+ women (14%). Also, there is a large percentage of Black transgender and non-binary parents of children under age 18 (13%). About a quarter of Baby Boomers (23%) report having grandchildren. When asked about becoming parents in the future, 54% of Black LGBTQ Millennials would like to become parents sometime in the future.

Own or Rent a Home

A third (33%) of the Black LGBTQ participants own the home in which they live. This percentage is much lower than the 65% of all Americans who own their home, or the 42% of all Black Americans who own their home. Research from CMI and Freddie Mac in 2018 demonstrated that LGBTQ community members in the United States are less likely to own a home than the general population (49% of all LGBTQ people). Reduced homeownership rates for Black LGBTQ community members is the result of many factors: Income, employment, and racial discrimination contribute, along with the fact that Black LGBTQ people are more likely to live in big cities where homeownership is less common. Also, LGBTQ people are less likely to be married or have children, which are key drivers of homeownership. Over half of Black LGBTQ participants (55%) fear racial discrimination in the home buying process. There are also fears of discrimination due to sexual orientation, gender identity, age, and disability.

Online surveys are unlikely to attract community members currently experiencing homelessness. What is concerning is the very high percentage of Black LGBTQ community members in this survey (31%) who had experienced homelessness at some point in their lives, especially among transgender and non-binary participants (44%). Other studies have examined the large percentage of homeless youth who identify as LGBTQ. This data appears to confirm that LGBTQ people have far too much personal experience with homelessness at some point in their life.

The survey asked a broad question about 18 potential health concerns. Health concerns are gender and age-specific. What was striking about the results was the high level of mental health concern, especially among younger participants and transgender and non-binary participants. Physical and/or mental health effects resulting from racial discrimination was also a consistent concern for all demographic groups. Preventing or treating HIV/AIDS was a major concern for all the men in the survey. Getting to a healthy body weight was a concern across many demographic groups, especially for women in the survey. For transgender participants, getting gender confirmation surgery and starting, maintaining, or access to gender confirmation hormones were important health concerns.

Results show that many Black LGBTQ community members do not have health care coverage (11% of all participants), and especially for participants under age 35 (20%).

The majority of Black LGBTQ participants consider themselves spiritual (88%), but fewer than half consider themselves religious (35%). Most grew up in a religious family (76%). The survey asked the participants who grew up in a religious family if their childhood religious group would accept them as an LGBTQ person, and only 17% said yes. Thirty percent said they currently attend religious or worship services (16% Millennials vs. 40% Baby Boomers), and of those, only 56% are fully out to their religious community.

Some Disconnect with LGBTQ Organizations

When participants were asked if they feel connected to LGBTQ social or political organizations, only 29% definitely agreed and 36% somewhat agreed. These percentages point to a need for all LGBTQ organizations to be more representative and inclusive of the Black LGBTQ community, and to work towards addressing concerns that are specific to the community.

Companies in the U.S. Are Not Reaching the Black LGBTQ Community

How to Reach the Black LGBTQ Community

Genuinely listening and understanding the community ranked as the top initiative, followed by supporting non-discrimination laws and policies, acknowledging past discrimination, and conducting diversity and sensitivity training in the workplace were the highest priorities. Advertising in the Black LGBTQ media and sponsoring Black LGBTQ events were also important strategies to authentically reach the community.