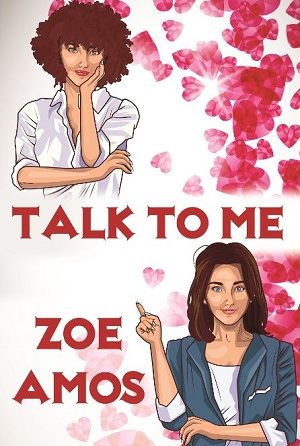 Talk to Me – Lesbian Romance Novel Explores Coming out in Midlife

“There are plenty of women who come out in midlife and beyond,” author Zoe Amos says. “Where are those stories?” The answer is in her new novel, TALK TO ME, available from Sapphire Books Publishing on March 1, 2021.

Amos is right. Statistics show the average age of a romance reader is 42, while the heroine is usually in her early twenties. Amos says, “Despite their proven success, stories featuring slightly older and even senior women are far and few. I’m not willing to be erased from the popular narrative of LGBT culture and American life.”

Women wait to come out for a variety of reasons. It’s common for lesbians to have an ex-husband and children because they didn’t realize they had gay feelings early on, or they did and married men anyway. Amos knows this personally and remains close friends with her ex-husband, her

high school sweetheart. “In adulthood I experienced a pronounced shift toward women, and on that gray scale we call sexuality, I’ve been only interested in women for twenty-some years. At midlife, people frequently look at who they are and reevaluate the direction of their lives. In Talk to Me, Claire’s family dynamic requires resolution. It makes the story stronger and more emotionally gripping.”

Amos shares another path with her protagonist, having worked a couple of years on radio doing board operations and on-air as a co-host—a tough assignment for an introvert. Claire faces similar challenges with the added complication of having fallen for her boss, Marly, a 30-ish shock jock with a wild sense of humor.

“Talk to Me is an over-the-top romantic comedy but with serious elements I believe readers can relate to,” Amos says. “Claire is trying to rebuild her relationship with her daughter, there is a threat of violence directed toward the radio station, and a confrontational on-air prank played on a Rush Limbaugh-type announcer, all of which reveal the true nature of each character.”

Claire takes a turn for the wild side when she chances into a job at San Diego’s KZSD radio to work with Marly, the sharp-tongued lesbian shock jock of Gayline. Under Marly’s close tutelage, Claire feels the sparks fly as she learns to screen calls and handle board operations. It’s enough that her formerly quiet life has been upended after separating from her husband, and at first, she keeps her feelings hidden. Even as bomb threats force the radio station employees to clear out, Claire’s attraction to Marly’s charisma, wit, and atypical beauty keeps her coming back. Meanwhile, she struggles to maintain a relationship with her teen daughter while her soon-to-be ex makes it clear he wants to try again. It’s two steps forward, one step back as Marly and Claire grow closer and admit their feelings.

Will Marly’s outrageous “anything goes” attitude be too much? As their on-air shenanigans and romance heat up, Marly’s crazed plan to boost ratings threatens their relationship, and ultimately, their lives.

Sapphire Books, located in the San Francisco Bay Area, is dedicated to lesbian literature, romance in particular. Christine Svendsen, the publisher, says her team was “…immediately drawn to Zoe’s writing because of her distinct ability to engage the reader. We know they’ll enjoy the love story.”

Talk to Me is available March 1, 2021 from Sapphire Books.

Tell us a little bit about your book, Talk to Me

The story starts when Claire applies for work at a fictional San Diego AM radio station to start a new life. You might say Claire is “newly” gay; she’s already out and separated from her husband. She lands a job as a call screener and has no idea what’s she’s getting into with Marly, the lesbian hostess of the radio show, Gayline. At first, everything seems normal, but when Marly launches into

outrageous dialogues, Claire realizes Marly is a shock jock! This is a huge departure from Claire’s former life as a housewife and mother of two older teens. She stays at her job because she can’t deny the attraction she feels toward Marly, even while she struggles to settle her upended family relationships. There are a number of subplots, including one with a Rush Limbaugh-type rival announcer. Without saying too much, it’s an over-the-top comedy drama, and definitely follows the romance genre.

Why was it important to tell the story of a woman who comes out later in life?

This happens all the time and yet it’s side-stepped in the lesbian romances I’ve read. People come out at all ages, sometimes well into their senior years, so why not talk about it? These stories need to be heard. A lot of people I know are tired of reading romances that feature beautiful twenty-somethings with no family attachments—how convenient. In Talk to Me, Claire is in her mid-40s, her children are mostly grown, and at her midlife stage, it’s not uncommon to take a look at who you are and reevaluate the direction of your life.

How did you learn so much about what goes on at a radio station?

The radio aspect is closely tied to my own life. Back in the mid-90s, I unexpectedly ended up learning board operations and then co-hosting a jazz program at KBNN for two years. Even though it was this dinky radio station out in the back country of San Diego County, let me tell you, it was scary being on the air, and at the same time, exhilarating. I figured it out and grew to like it a lot.

What do you hope readers will take away from Talk to Me?

​My primary objective is entertainment—I write stories I want to read. As an author, I know you have to rewrite and edit, rewrite and edit—it never stops, so you better like your story. Romances are often dominated by the same tropes. Instead, I had an idea for a lively original story where the protagonist had to resolve a strong family conflict in addition to her finding her way to the woman she desires. This story has elements anyone can relate to, no matter their sexuality, or even if they weren’t interested in romances. I think a lot of us could use a dose of fun right now and some extra love. I hope readers finish with a smile, a few warm fuzzies, and a better understanding that people often share the same emotions over life’s ups and downs.

What else have you published?

I self-published a futuristic novella, Superior: Adventure Romance, that takes place in Michigan’s Upper Peninsula. The romantic element is affected by what I imagined could be a realistic, yet dysfunctional society by including the kinds of social division we’re seeing today, tied in with the effects of climate change. I’ve had short stories published in lesbian anthologies under Zoe Amos, my pen name, and others self-published. They’re all available online.

It’s not easy to get your book traditionally published. How did you do it?

In a word: persistence. I did a lot of research and Sapphire was my publisher of choice because they cater to the lesbian romance market. Unfortunately, they were closed to submissions. As soon as I could, I submitted to Sapphire. They got back to me right away and put me under contract before assigning the book to their editor, another plus.

If you were casting the movie version of your book, who would play the leads and why?

For Claire, I’d say Sarah Paulson. She has this prim side, but can break out of it for her excitable moments. And for Marly, it’s gotta be Kate McKinnon with her crazy energy. Both of them have the comedic timing and versatility needed for the roles, for ad-libbing, and for when it gets serious. They’re the right age, both gay, which for the sex scenes, um, okay, I’ll just stop there.

What are you working on currently?

There’s the romance at the car dealership, the romance with corporate subterfuge, a road trip adventure, short stories, a non-fiction book on giving, and a memoir. I’ve considered writing a prequel to Superior , which supposedly takes place after the Second Civil War. Now I think, yow! Maybe that was too prescient.