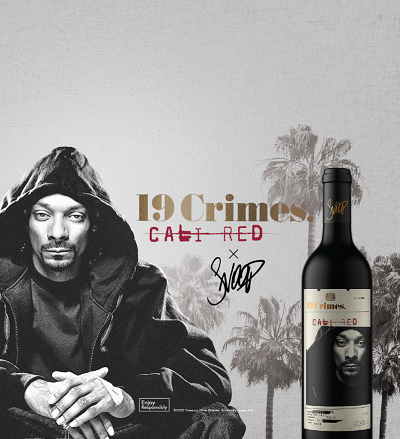 Snoop Dogg‘s Cali Red wine is now available at the LCBO across Ontario. It’s the first-ever California wine from 19 Crimes, well known for its Australian blends inspired by the convicts-turned-colonists that built Australia. Like 19 Crimes, Snoop Dogg is a rule-breaker and culture creator who is passionate about redemption, making him the perfect collaborator to bring Cali Red to life.

This is the first California wine from the Australian winemaker. Cali Red is a blend of 65% Petite Syrah, 30% Zinfandel, and 5% Merlot that has been aged in American oak. It has notes of rich vanilla and chocolate with a hint of smoke. Celebrity branding of alcohol has become quite common, but this is one that’s actually good tasting, and affordable. It retails for $20.35 at the LCBO for a 750ml bottle, with an ABV of 14.1%.

19 Crimes is well-known for its innovative use of augmented reality (AR) technology on its wine labels, and Cali Red will be no different – Canadians who pick up a bottle will have a unique opportunity to get an “up close and personal” Snoop experience on every bottle. All you have to do is go to askthedoggfather.com on your phone, scan the label, and ask Snoop a question. A holographic version of him will then serve you some words of wisdom. For varying experiences, try scanning a few times as you make your way through the bottle.

As part of a marketing campaign to get the word out, the LCBO at Front and Spadina has a Snoop Dogg statue created by Toronto artist Jordan Sook to help promote the wines. Cali Red can also be found at participating retailers in B.C., Alberta, Saskatchewan, Manitoba, Nova Scotia, New Brunswick and Newfoundland. Apparently statues are popping up in other markets as well, like Calgary and Vancouver. 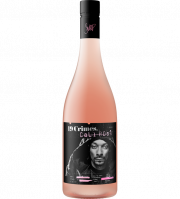 Fans can expect more Snoop Dogg branded wines to follow, as a rosé was just released in the United States, part of a multi-year partnership with 19 Crimes. Snoop Cali Rosé is a blend of Grenache and Zinfandel that breaks the rules of typical rosé culture with a touch of Cali-behavior and Snoop’s iconic West Coast Style. 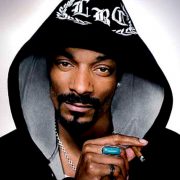 An Entertainment Icon, Snoop Dogg has reigned for more than two decades as an unparalleled force who has raised the bar as an entertainer and globally recognized innovator.  Snoop defines entertainment history.  An award-winning entertainer, Snoop Dogg has released 19 studio albums, sold over 40-million albums worldwide, reached No. 1 countless times on Billboard charts internationally and received 20 GRAMMY® nominations.

This new foray into the wine market follows Snoop’s earlier entry into the alcohol beverage arena with his INDOGGO gin. INDOGGO was developed by the King of “Gin & Juice,” in partnership with his friend and spirits veteran, Keenan Towns of Trusted Spirits, a beverage supplier that develops celebrity wine and spirits brands, and Prestige Beverage Group, an industry leading importer and brand innovator of award-winning wines and spirits.

“When I wrote ‘Gin & Juice‘ back in ’94 it was about good feelings and real experiences, it just naturally became a global anthem,” said Snoop Dogg, the original purveyor of gin, juice and good times. “When creating INDOGGO, I wanted to give those feelings new life with an approachable juicy gin that’s smooth like the D.O. Double G.”

INDOGGO is certified gluten free, distilled five times with seven premium botanicals and is infused with all-natural strawberry flavor with no added sugar. The gin is light on the juniper flavor and features orange, coriander and cassia botanicals for a taste of strawberry and citrus with a slightly sweet and fruity finish.