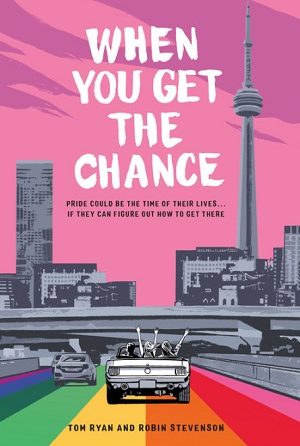 From award-winning Canadian authors Tom Ryan and Robin Stevenson comes a heart-warming tale of two cousins on a road trip to Toronto for the Pride Celebrations. WHEN YOU GET THE CHANCE is a contemporary YA novel, perfect for readers looking for a story of friendship and family.

As kids, Mark and his cousin Talia spent many happy summers together at the family cottage in Ontario, but a fight between their parents put an end to the annual event. Living on opposite coasts–Mark in Halifax and Talia in Victoria–they haven’t seen each other in years. When their grandfather dies unexpectedly, Mark and Talia find themselves reunited at the cottage once again, cleaning it out while the family decides what to do with it.

Mark and Talia are both queer, but they soon realize that’s about all they have in common, other than the fact that they’d both prefer to be in Toronto. Talia is desperate to see her high school sweetheart Erin, who’s barely been in touch since leaving to spend the summer working at a coffee shop in the Gay Village. Mark, on the other hand, is just looking for some fun, and Toronto Pride seems like the perfect place to find it.

When a series of complications throws everything up in the air, Mark and Talia—with Mark’s little sister Paige in tow—decide to hit the road for Toronto. With a bit of luck, and some help from a series of unexpected new friends, they might just make it to the big city and find what they’re looking for. That is, if they can figure out how to start seeing things through each other’s eyes.

Tom Ryan and Robin Stevenson have been nominated for some of the highest literary awards in Canada, and they share a passion for writing relevant, contemporary works that engage LGBTQ+ characters.

Tom Ryan is the award-winning author of six books for children and teens. His debut novel, Way To Go, was published in 2012 with Orca, and was a nominee for the OLA White Pine Award, and made the 2013 ALA Rainbow List, as well as YALSA’s 2013 Quick Picks, with positive reviews from Publishers Weekly, Quill & Quire, and VOYA. His follow-up, Tag Along, received numerous glowing reviews from Kirkus, VOYA, and School Library Journal, and was nominated for a number of distinctions, including CCBC’s (Canadian Children’s Books Council) Best Books and the 2013 ALA Rainbow List, and was also a nominee for the OLA White Pine Award and the Stellar Award. Tom was born and raised in Inverness, Nova Scotia, and currently lives in Halifax with his husband Andrew and their awesome dog.

Robin Stevenson is the author of more than twenty books for children and teens. She has written both fiction and nonfiction, from early chapter books to middle-grade and young adult novels. She regularly presents in schools, offering book talks, creative writing workshops, and presentations on LGBTQ+ Pride. Robin’s YA novel A Thousand Shades of Blue was a finalist for Canada’s highest literary honor, the Governor General’s Award, and is included on CBC’s list, “100 YA Novels that Make You Proud to Be Canadian”. Her middle-grade novel Record Breaker won the Silver Birch Award, Canada’s largest reader’s choice award for young readers. Robin lives on the west coast of Canada with her partner and their son.