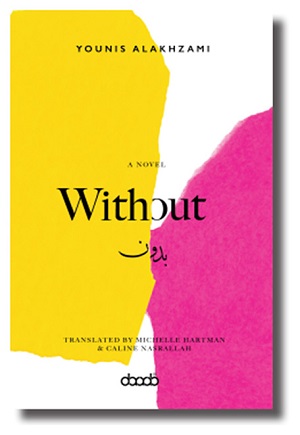 While some countries accept transsexuality, most of Arab countries are yet to do so. “Without”, by Younis Alakhzami, is a frank and sensitive account of a man searching for belonging as someone he feels he is not.

“Without” tells a story of searching for belonging both in the world and within your own skin. Born in Saudi Arabia to a Yemeni family, the novel’s protagonist has been ill-at-ease since childhood, because he never felt like a girl. Alia’s alienation grows as he slowly comes to realise that he is, in fact, a man and begins the transition to live life as Ali.

This is a very important story to tell as it portrays the hardshipfaced by gender non-conforming people in society. The novel is sensitive and frank in how it approaches an intersex person’s struggles with the realities of love, friendship, and survival against the backdrop of a life lived between Saudi Arabia and Yemen, and then later the UK. Without navigates complex issues in a very human way, painting an honest portrait of how people come to terms with challenges they never expected to face. Told in a deceptively simple style, through tightly woven and skillful narration, Without makes these struggles resonate with us all.

The book is about transgenderism in the Arab world. It is based on a true story of a Yamani girl born in Saudi Arabia and how much she suffered, socially and psychologically, during this transition.

Also available as an e-book from Amazon

An Omani writer, born in 1968, Younis Alakhzami participated in many local, regional and international literary forums. Head of the Short Story Writers in Oman in 2006 and 2007, and one of the founders of the Society of Writers in Oman, he holds a Masters degree in Information Systems Management from the USA in 1994 and a PhD in Geographic Information Systems (GIS) from the United Kingdom in 2000. His novel “Bar Alhekman” is taught in schools in Oman and has been made into a motion picture. He has been a judge for many local literary contests for both story and novel scripts.