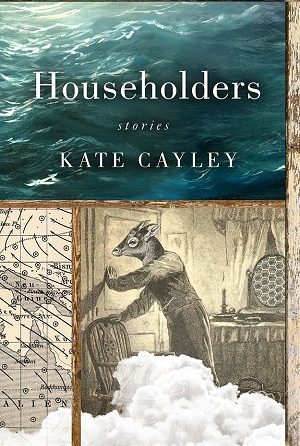 A woman impersonates a nun online, with unexpected consequences. In a rapidly changing neighborhood, tensions escalate around two events planned for the same day. The barista girlfriend of a tech billionaire survives a zombie apocalypse only to face spending her life with the paranoid super-rich. The linked stories in Householders move effortlessly from the commonplace to the fantastic, from west-end Toronto to a trailer in the middle of nowhere, from a university campus to a state-of-the-art underground bunker; from a commune in the woods to a city and back again. Exploring the ordinary strangeness in the lives of recurring characters and overlapping dramas, Householders combines the intimacy, precision, and clarity of short fiction with the depth and reach of a novel and mines the moral hazards inherent in all the ways we try and fail to save one another and ourselves.

Canadian author Kate Cayley‘s short story collection is brimful of gritty, queer, and utopic worlds. Cayley shines a light on queer women and their complex lives in a way that not enough literature does—even though years or generations have passed, the bonds between these women continue to withstand. Linked short stories about families, nascent queers, and self-deluded utopians explore the moral ordinary strangeness in their characters’ overlapping lives.

From Trout and Strawberry, two girls raised in a cult-like commune in Maine who continue to circle each other in adulthood, to Miranda, who dresses like a doll and needs a sexual surrogate, to Liza, trapped in a futuristic bunker post-pandemic and unsure why the wealthy want to keep her, Householders is a magnificent map of how we’re all searching for signs and connections in our strange world. These stories cross boundaries, both physical and emotional, in the best way possible.

Kate Cayley is a fiction writer, playwright, and poet. She has written a short story collection, How You Were Born, two collections of poetry, When This World Comes to an End and Other Houses, a young adult novel, The Hangman in the Mirror, and a number of plays, both traditional and experimental. She has won the Trillium Book Award, the Geoffrey Bilson Award for Historical Fiction, an O. Henry Short Story Prize, and a Chalmers Fellowship, and been a finalist for the Governor General’s Award for Fiction, the K. M. Hunter Award, and the Toronto Arts Foundation Emerging Artist Award, and long-listed for the Frank O’Connor International Short Story Prize and the CBC Prize in both poetry and fiction.

She was the co-founder and artistic director of Stranger Theatre from 2001-2011, and co-created, directed and wrote eight plays with the company; her work with Stranger Theatre was performed in Toronto, Montreal, Halifax, Chicago, Philadelphia, New York City and Istanbul, among other places. She was a playwright-in-residence at Tarragon Theatre from 2009-2017, and wrote two plays for Tarragon, After Akhmatova, and The Bakelite Masterpiece, which went on to multiple American productions. She has an ongoing writing collaboration with immersive theatre company Zuppa Theatre, most recently on The Archive of Missing Things and This Is Nowhere. Her short stories, poems and essays have appeared in a wide variety of magazines and anthologies, including Best Canadian Poetry. She has been writer in residence at McMaster University, and mentored emerging writers through the University of Guelph Creative Writing MFA, the University of Toronto School of Continuing Studies, Diaspora Dialogues, and Sisters Writes. She lives in Toronto with her wife and their three children. Her second short story collection, Householders, is forthcoming from Biblioasis.

A Biblioasis Interview with Kate Cayley

For those who are coming to your work for the first time, can you tell us a little about yourself and your writing?

I started out as a playwright, which I still am, though it’s hard to figure out what that means at the moment, since theatre will probably be reconfigured in various ways. To be more exact, I started a theatre company when I left university, twenty years ago now, and started writing plays as part of that. Listening to words said aloud was very exciting, strange and oddly humiliating or exposed, perhaps even more than writing a book. I wrote poems, then short stories, along with the plays, but writing that wasn’t in some way for performance happened slowly and somewhat in the gaps for a long time. I live in the west end of Toronto with my wife and our three children. Householders is my second short story collection, and I’ve also published two poetry collections and a young adult novel, and have an ongoing collaboration with immersive company Zuppa Theatre as a writer. I was also a playwright in residence at Tarragon Theatre for eight years. This sounds more organized than it is. I still feel, as a writer, that I’m stumbling around hopefully in the dark. I don’t know if I have anything as grand as themes, but I am interested in the texture of private life, especially in how it is, itself, a kind of resistance to authority, to ideological coherence, because we are not consistent with ourselves, not really, and I’m also interested in religious faith and and the moral hazard inherent in trying to save someone else. And in loneliness and the way history plays out in domestic spheres. The way we try to imagine each other, and fail and sometimes succeed, more or less by accident.

You have a fascinating way of exploring memory, nostalgia, and regret in Householders, such as the woman reflecting on her relationship with Miranda in “Handful of Dust” or Trout taking her mother on her final journey home in “Piss and Straw”. Was this motif something you intended to connect the stories in the collection?

I hope so, though I often find a motif emerges later, in hindsight and as part of the process of assembling and rewriting a collection. It’s interesting you mention those two stories, because I think both of them are, in different ways, about moral ambivalence, which is something fiction is very good at grappling with and which I often think is the “value” in fiction, insofar as it has a social value, or should (but that’s a bigger question). In “Handful of Dust,” the narrator realizes, years later, that she has failed in her attitude to this person she knew long ago, that she didn’t know what she was looking at, even though she thought she did. This has happened to me many times and I find it increases with age: looking back and knowing you were wrong, that you didn’t know the whole story about someone and didn’t think there was more of a story to know. In “Piss and Straw,” Trout makes a decision that could be brutally wrong and has to accept that this might be the case and that she can never know. She’ll just have to live with not knowing whether she was right. Both of the stories, like the other stories in the collection, are about occupying that place of not being able to know, for sure, one way or the other.

This originally started as a novel. How did you decide to turn it into linked short stories?

I worked on a novel about Trout and the Other Kingdom for about five years, and finally gave it up. Something just wouldn’t come right. I don’t know if it was that I’m not equal to the form, or something in the book itself. To distract myself, I wrote a number of short stories, and they worked better than the novel. Then, when I decided, with much regret, to put the novel aside instead of reworking it endlessly hoping someone would publish it, I found that parts of the novel could be repurposed as short stories, sometimes with only small tweaks (this should have tipped me off earlier that this was not a novel). So those got added to this collection. It was quite far in the process that Dan Wells, who edited the book, proposed that I bring in more material from the novel and link up all the stories so that each one has a connection to this dubious and tragic commune. This was recent enough that even the covid pandemic appeared in the final story, which was amazing and felt almost eerie, because I put the book aside in 2019. I still think of it often, and I’m so glad that some parts of it now have this other life, and a bit sad for the parts that don’t.

How did you come up with the Other Kingdom?

I don’t know. I read a lot of books about communes, and various visions of utopia, and it bears a superficial resemblance to some of them. But most of it just seemed to arrive.

I love that your stories are filled with strong, complicated women struggling with doubt, faith, and sexuality. By returning to them in different stories from varying perspectives, I enjoyed how my sympathies shifted depending on who was telling the story. Which character’s voice was the easiest for you to write? Were there any voices you felt compelled to return to again and again?

Trout kept coming back, through the novel and then in the stories, though I don’t know if she was easy to write because she’s a bit of a cipher, her past has made her feel like a stranger in her own life. I don’t know if I think of her as strong. The easiest story to write was definitely “The Crooked Man,” which I wrote first and very fast and then compared everything else to it for years because it felt so effortless and it made me think “oh good, I’ve arrived, now everything will come without having to bang my head against the wall and go in wrong directions five times and give up and come back.” Which is really naïve, but I did sort of think that. That there would be an arrival.

What are you reading right now?

Machines of Another Era, by Bess Winter, which is a very precise and layered short story collection, The Last of Her Kind, by Sigrid Nunez, which I picked up and read the first page of in a bookstore about fifteen years ago and was completely floored by, but then promptly forgot both the author and the title and recently found again after I read The Friend, and Intruder, by Bardia Sinaee, which I love.