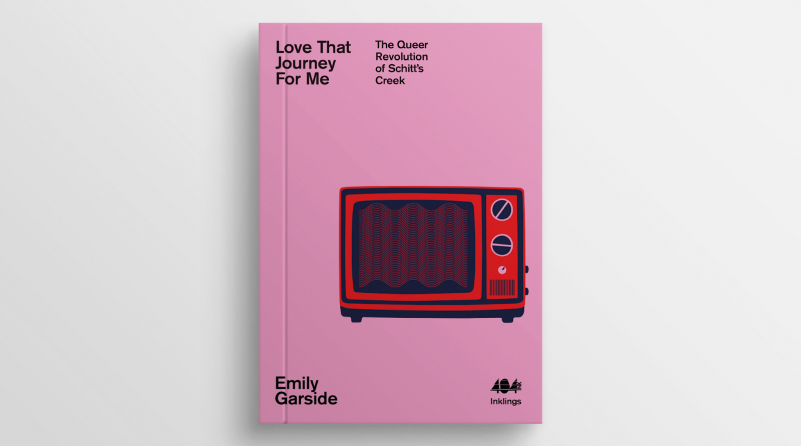 Love That Journey For Me: The Queer Revolution of Schitt’s Creek

Love That Journey For Me dives deep into the cultural sensation of Canadian comedy-drama Schitt’s Creek. Considering the fusion of existing sitcom traditions, references and tropes, this Inkling analyses the nuance of the show and its surrounding cultural and societal impact as a queer revolution.

By discussing how the show reshapes LGBTQ+ narratives from the crafting of the town itself, and celebratory influences including Cabaret, to how writer- creator Dan Levy utilised and subverted expectations throughout his work, Emily Garside will showcase how one TV show became a watershed moment in queer representation and gay relationships on screen.

​Part analysis of Schitt’s Creek’s importance, part homage to a cultural landmark, this is a show that – in the words of David Rose himself – needs to be celebrated. This book is that celebration. This book is unofficial, and unaffiliated with Schitt’s Creek and its brand. Emily Garside was profoundly moved by the impact of Schitt’s Creek and the lessons it offered as a queer person, even one who had spent over a decade writing about queer stories as an academic and journalist

“I know people mock it – say it’s ‘only TV’ – and while part of me hopes those people never need stories as badly as I did, that they don’t become familiar with the deep craving to feel seen in something, another part of me hopes they can experience the magic of something which truly speaks to them because – whatever it is, whatever form it takes – it always changes things.”

Garside guides readers through an array of queer-led topics within the show. From the infamous fashions of the Roses, to the links to romcom and sitcom past through a queer lens. Moving on to tackle the show’s more serious points like homophobia and its absence, and coming out stories. She also uses her substantial background in musical theatre writing to lift the lid on the importance of Moira’s production of Cabaret in the show for queer storytelling. Filled with an array of ‘Easter Eggs’ about the show, but also personal reflections on its importance, the book is both informative and reflective on the power and importance of queer stories.

Emily Garside is a writer of many kinds as well as professional dog Mum. Emily spent a number of years as an academic and lecturer, beginning with her PhD on theatrical responses to the AIDS crisis, and the evolution of LGBTQ theatre. Currently she is working on two books related to her research. She now specialises in Queer Culture Writing. As a journalist she is a regular contributor for The Queer Review and has written for American Theatre, Slate, BBC and The Stage. @EmiGarside

404 Ink was founded by Heather McDaid and Laura Jones in 2016 with the view that publishing could be a little louder and a little more fun. We still feel that way today. Our goal is to support new and emerging writers’ careers, and we believe in quality over quantity. That is, not publishing to fill a schedule but publishing because that book truly needs to be read.

Our authors and books have won awards including the Saltire Society First Book of the Year, Outstanding Literature Award at the Scottish Culture Awards, and are Scottish Book Trust New Writers Awardees, as well as appearing in The List Hot 100, and shortlisted for many more. They’ve appeared in Huffington Post, Elle, Alternative Press, New York Magazine, Oprah.com,