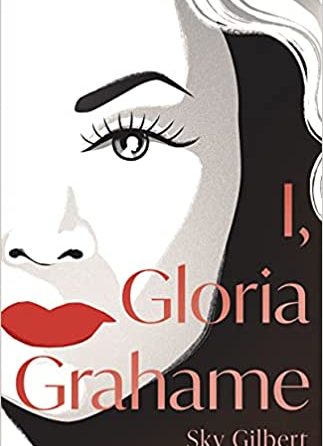 Sky Gilbert’s “I, Gloria Grahame” – taking on the persona of a dead movie star

A professor of English literature writes the autobiography of his fantasy alter-ego, wanton movie star Gloria Grahame, while his own sexual desires go frustrated.

Denton Moulton — a shy, effeminate male professor — lives inside his head, where he is really a long-dead movie star: the glamorous Gloria Grahame, from the golden age of Hollywood. Professor Moulton is desperate to reveal Gloria’s shocking secret before he dies. Does he have the right to tell this woman’s story? Who, in fact, has the right to tell anyone’s story at all?

A scandalous, humorous novel of taboo desires and repression, I, Gloria Grahame alternates between Gloria’s imagined life with her film-director husband, Nicholas Ray, director of Rebel Without a Cause, and Denton’s increasingly frustrated real-life attempts to produce his own work of art: an all-male drag production of Shakespeare’s Venus and Adonis. The novel takes us from high-strung film sets to dark bars and the puritanical offices of government arts granting agencies, where Denton runs up against the sternest warnings that he may not, in fact, imagine himself as someone else, even in art.