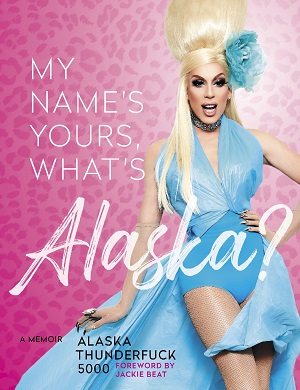 My Name’s Yours, What’s Alaska? A Memoir by Alaska Thunderfuck 5000

ALASKA THUNDERFUCK 5000, primarily known mononymously as Alaska, is a drag performer and recording artist best known for competing in the fifth season of RuPaul’s Drag Race and as the winner of the second season of RuPaul’s Drag Race All Stars. She has traveled the world touring her chart-topping hits from her variety of albums and has appeared on television and in film.

She currently co-hosts the hit podcast “Race Chaser with Alaska & Willam,” and continues to inspire the people of Earth with her unmistakable brand of irreverent humor and extra-terrestrial glamour.

Also, if you happen to be in the Pasadena, California area, be sure to grab tickets to see Alaska in a leading role of the new GoGo’s play, “Head Over Heels“.