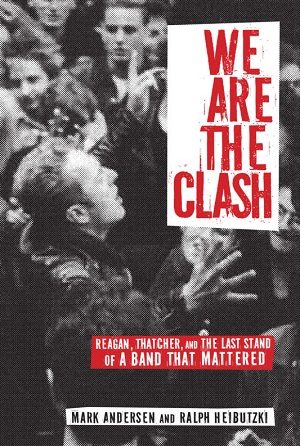 The Clash was a paradox of revolutionary conviction, musical ambition, and commercial drive. We Are The Clash is a gripping tale of the band’s struggle to reinvent itself as George Orwell’s 1984 loomed. This bold campaign crashed headlong into a wall of internal contradictions and rising right-wing power.

While the world teetered on edge of the nuclear abyss, British miners waged a life-or-death strike, and tens of thousands died from US guns in Central America, Clash cofounders Joe Strummer, Paul Simonon, and Bernard Rhodes waged a desperate last stand after ejecting guitarist Mick Jones and drummer Topper Headon. The band shattered just as its controversial final album, Cut the Crap, was emerging.

Andersen and Heibutzki weave together extensive archival research and in-depth original interviews with virtually all of the key players involved to tell a moving story of idealism undone by human frailty amid a climatic turning point for our world.

An impassioned history of the final, turbulent years of The Clash under the dark shadow of Reagan and Thatcher.

MARK ANDERSEN is the coauthor of Dance of Days: Two Decades of Punk in the Nation’s Capital and author of All The Power. He lives in Washington, DC. We Are The Clash is his latest work.

RALPH HEIBUTZKI (Chairman Ralph) is the author of Unfinished Business: The Life & Times of Danny Gatton. He lives in southwest Michigan. We Are The Clash is his latest work.