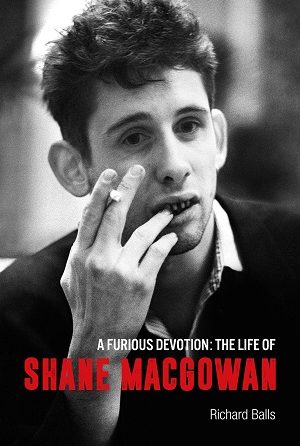 A Furious Devotion: The Life of Shane MacGowan

Shane MacGown is a punk poet protagonist, legendary drinker, Irish musical icon, and accidental creator of one of the most controversial Christmas songs ever made.  The complete and extraordinary journey of the Pogues’ notorious frontman from outcast to national treasure has never been told – until now.

Fairytale of New York is a song about a down and out Irish man on the streets of New York City, who is picked up and thrown in the “drunk tank” over Christmas. Not your typical feel good, all is well, type of holiday cheer. However, it continues to be played regularly on radio stations globally, and it continues to generate controversy each holiday season.

“You scumbag, you maggot
You cheap lousy faggot”

These few little words have ignited conversation every year, yet the song continues to be played without censorship. There’s a whole section written about how this song came to be, starting on page 144, and why it remains their most popular single to date, earning him an average of 250,000 UK pounds per year. This year that’s poised to increase  UK supermarket chain, Aldi, is using an instrumental version of the song in their advertising campaign.

MacGowan recently divulged his own favourite Christmas song as being, ‘The Christmas Song (Merry Christmas To You)’, by Nat King Cole

“I’m a big Nat King Cole fan. He’s a great singer. He’s a great piano player. He was a great guy. He was probably the first black man to have his own TV show in the States. So, this is my favourite Christmas song. There is not a lot to say. If you dig Nat King Cole, then his Christmas song is the best. It’s got a great tune. It’s got a great vocal. It’s a great song that happens to be about Christmas. I couldn’t compare my ‘Fairytale of New York’ to ‘The Christmas Song’. I don’t think it is as good, but I’m glad ‘Fairytale of New York’ makes people happy at Christmas.”

A Furious Devotion vividly recounts the experiences that shaped one of the greatest songwriters of his generation: the formative trips to his mother’s homestead in Tipperary, the explosion of punk which changed his life, and the drink and drugs that nearly ended it.

As well as exclusive interviews with Shane himself, author Richard Balls has secured contributions from his wife and family, and people who have never spoken publicly about Shane before: close associates, former girlfriends and the English teacher who first spotted his literary gift.  Quotes from other famed personalities, Nick Cave, Aidan Gillen, Cillian Murphy, Christy Moore, Sinead O’Connor and Dermot O’Leary all pay their tributes. This frank and extensive biography is also filled with many previously unseen personal photographs.

With so many chiming in, there’s a lot of jumping back and forth between individuals, which often leaves you wanting to hear more from Shane himself. Should that be the case after reading this book, MacGowan has also had his life story unfold on screen as well earlier this year, in the biopic, Crock of Gold: A Few Rounds With Shane MacGowan. Fans can also look forward to an art book filled with photographs, penned by MacGowan himself, to be released spring of 2022.