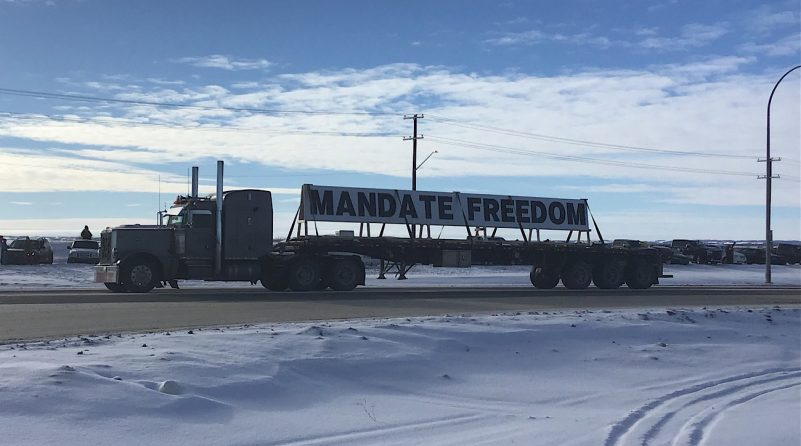 As the trucker convoy rolls across Canada, whether it be one hundred or fifty thousand trucks as no one seems to truly know, it raises the question if people really understand our political structure in Canada.

First off, the concern for me, is that MPs and their staff are receiving death threats from people within this convoy, which the leaders have not condemned. Some folks have suggested the organizers are not truckers and are tied to White Nationalists and Yellow Vesters which we have all seen before. I would certainly be concerned to support them hearing this because that is not what the real Canada is about.

Let us be honest with ourselves. Has every level of government done things right during this pandemic? We can say no. Did they learn anything? Not sure at this time, but if the last federal election told us anything,  not so far. The thing is Pigeon, what level of government has lived through a pandemic that kills millions of people? None of them, because none of us are old enough. We cannot blame government for everything that is wrong, we cannot blame government for the price of gas, because the oil companies reduced production when the pandemic started to drive the price up because people were driving less. This might lead us to believe our governments did it, when in fact it was just corporate greed.

Let us get back to the “Freedom Convoy.” When crossing an international border, this does fall under the federal government. However, public health within Canada falls under the provincial government. A federal government can and does set rules to enter their country, just like the USA has done the same. I am unsure how this “freedom convoy” will change a position that over 85% of Canadians agree with, plus its provincial mandates they keep talking about that is a violation of their “freedom”, with a sprinkle of border crossing. It’s estimated that only 26,000 of the 160,000 of truckers in Canada are not vaccinated. My question would be to those that are not vaccinated, why not just get a route within Canada so you no longer need to cross an international border like the USA, who is denying you anyway, because their rule is you must be vaccinated?

When I ask the question to anyone who supports this, “What freedoms have you lost?” I never seem to really get an answer that jives with their freedom violation claim. The responses are usually, “The government is forcing me to get a vaccine.” Usually, I scratch my head, because I do not see the military running around Canada, holding people down to jab them in the arm with a vaccine. Or we get “I cannot go and get groceries anymore.”. Really, where? Because you have a right to food and even if you cannot go in for whatever reason, you get it through the internet and you never have to leave your house if you don’t want to. The fact is, all governments are trying to protect all Canadians and for anyone to suggest that COVID is a simple flu, is clearly reading the wrong book, if they are reading at all.

The claim that its less the 1% death rates by some is not the issue, the issue is the healthcare systems across Canada (which are provincial) are so under funded and stressed that they are on the verge of being over run to the point that medical professionals would have to be able to choose who they can help and who they will send home to die. I do not know about anyone else, but that is a decision I would never want to have to make.

As a result of the years of funding cuts to healthcare, we ended up in lock downs to prevent hospitals over run. This is not a new problem either, healthcare staff have been screaming this for years at the top of their lungs, but governments are not listening. Why does the convoy not fight for their right to properly funded healthcare? I believe many have missed this memo.

Now, if the “Freedom Convoy” really wanted their “freedoms” back that they claim they lost, wouldn’t it make more sense to fight for healthcare funding, end poverty, and restore public services that so many people are currently without? If we had a healthcare system that was properly funded, wouldn’t that have ended the pandemic quicker and restore life to normal again?

The fact is Pigeon, they have totally missed the mark, and now according to a post on social media by MP Charlie Angus, shared that MPs and their staff are being threatened with violence by some of those within the “Freedom Convoy”, yet the organizers have not denounced such behaviour. Also, the fact that PPC Maxime Bernier appears to be supporting this should be a very big concern for all Canadians.

If you have not denounced this behaviour either, then you have also become part of the problem. Or if you say, there are good people there, and still support it, because you believe in the cause but not the actions, Pigeon, a hate comment, or violent comment is condoned by you if you say nothing.

The numbers do not lie Pigeon, it appears that most of the almost 39 million Canadians support vaccine as the solution to end COVID. It was also stated by Dr T. Tam that we should be moving into a new era of this pandemic by spring, because of the work Canadians have done. It will hopefully become a flu shot once per year like many have already been getting, thereby ending all these lock downs, etc. There are good things coming, and that my friends are what we should focus on.

The other thing we need to truly start doing, is to fix our public services like healthcare, because it is clear that we can manage things much quicker and easier if we just do the right thing moving forward. Pigeon, I just know we can no longer do things the way we have. Too many lives were lost during COVID, that we should never have lost, and all it takes is for us and our governments to put people and their needs first. My fingers are crossed Pigeon, that we have all seen the changes we need. Now, its time for all Canadians to take that to all levels of government, because as Canadians, we deserve nothing less.

Stay Safe Pigeon, and remember, be careful what you support, because it may not be what you think it is.