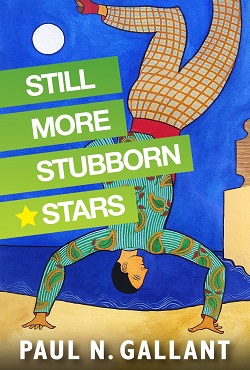 STILL MORE STUBBORN STARS follows the story of Roger, a hapless but enthusiastic Come-from-Away who, arriving in Prince Edward Island with his family as a child, struggles to figure out the ‘Island’ way of life.Roger eventually rises to power, founding the sprawling Acadian Culture Centre in rural western PEI. Here he becomes an impresario of Acadian kitsch and a catalyst of cultural change…not without getting his heart broken and making a few enemies. When Roger dies suddenly at age 47, the death notice in the local newspaper unexpectedly lists a “special friend,” a married woman and talented fiddler, setting off conflict and soul-searching in the “Up West” community.Roger’s escapades fuel a comic, moving and sometimes thrilling drama across four decades of Prince Edward Island life. Taking place during the era of PEI’s Comprehensive Development Plan (a government scheme to modernize the province), the renaissance of Acadian culture in the Island’s rural communities and the campaign to build a “fixed link”; eventually the Confederation Bridge; connecting PEI to the mainland, this debut fiction will captivate and delight.

Paul Gallant was born in Alberton, P.E.I., the year the province launched its comprehensive development plan, Paul Gallant has lived in Ottawa, Vancouver and Toronto, where he has worked as a writer and editor for more than 20 years. Now a Toronto-based journalist, he is best known for his work as an editor at the LGBTQ+ publication Xtra, the travel magazine BOLD and the Toronto-celebrating website Yongestreetmedia. In the past decade, in addition to his work as an editor, Gallant has published freelance work in The Walrus, the Toronto Star, The Globe and Mail, the National Post, Reader’s Digest Canada and many other publications.